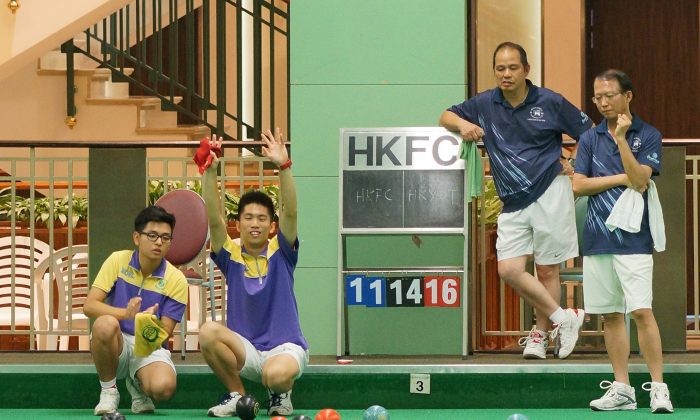 While poor weather disrupted a majority of league games last weekend, the game between the Youth Team and Hong Kong Football Club became the only game that went ahead in the top two divisions. The HKFC team cannot hold onto their home green advantage and lost 2-6, allowing the youngsters to maintain their pole position. (Stephanie Worth)
HK Lawn Bowls

HONG KONG—Another weekend of heavy rainstorms again washed away most of the Hong Kong Lawn Bowls Association Premier League games scheduled, forcing the League Panel to impose an emergency rules to extend the deadline of reschedule games to ease the already congested fixtures.

While teams are still trying to finish the games delayed by the poor weather over the past two weeks, the rainstorm last Saturday, May 23, forced the closure of all outdoor greens, postponing more games. Of the 63 games scheduled, only 13 were played over the weekend.

None of the Division 1 games went ahead as all of them were scheduled to be played on an outdoor green. While the natural grass greens of Taipo, Kowloon Bowling Green Club and Kowloon Cricket Club was declared closed in the morning, Tuen Mun Sports Association tried to move ahead with their game on their artificial green but abandoned the match after the trial ends.

The game at the Police Officers Club did go ahead but when the red rainstorm alert was issued at 4:05 pm, the game was also abandoned.

In the top two divisions the only game that went ahead was a Division 2 game between Hong Kong Football Club and the Youth Team, which was played in mid-week at the HKFC indoor green.

The Youth Team won the game 6-2 to stay atop of the division with a 10 points lead. But the team has played four more games than the second placed Indian Recreation Club, who has won all their three games 8-0.

While the spontaneous sunshine on Sunday and Monday allowed some of the postponed games to go ahead, there are still 44 men’s and 22 women’s games to be played to catch up. In view of the massive number of games postponed, the League Panel, under the HKLBA, announced the extension of the deadline for these rescheduled games, according to Cyril Leung, Vice President in charge of the league.

“Normally teams need to replay the game within a period of 22 days, but we decided to give them until August 1 to complete these games,” said Leung.

However he also warns the teams not to leave it too late to play the game, “If the game was not played on or before August 1 for whatever reasons, penalty of points deduction will be imposed to both team,” he continued.