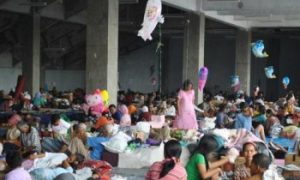 Thousands on Strike for Over Seven Days in Baoding, Hebei Province
0
Beyond Science

A physical education class was suddenly interrupted for teacher David Crichton and his students at Galashiels Academy in Scotland on March 29 by an unusual event: a shower of worms.

“We were out playing football and had just done our warm-up and were about to start the next part of the lesson. We started hearing this wee thudding noise on the ground. There were about 20 worms already on the ground at this point,” Crichton told Scottish Television.

“Then they just kept coming down. The kids were laughing but some were covering their heads and others were running for cover for a while. They just scattered to get out of the way.”

Later, he and his colleagues counted that about 120 worms had fallen. “After it happened, I counted about 60 on the multipurpose court we were on,” Crichton said. “I went in and told the other PE teachers and we went out to the tennis courts about 100 yards away. There were about 60 there on the tennis courts.”

The cause of the event is unknown. “I spoke with the science department but none of them had any explanation for it,” Crichton said.

“One of them thought it was maybe a freak weather thing, but it was a clear calm day. And we’re away from any buildings so it’s not like someone could have been throwing them.”

Some students suggested that the worms might have been due to a flock of birds that had flown by. “The birds were flying diagonally across the court towards the swimming pool,” noted Jake Grierson in an article on Galashiels Academy’s website.

“The funny thing was that the birds had already started to disappear when the worms started to fall. There seemed to be far more worms than birds!”

The unexplained instances of animals and objects falling from the sky are termed “foreign rains,” and have been documented throughout history. Animals like fish and frogs are common cases of foreign rains. Yoro, Honduras, is known to have rains of fish every year between May and July. Instances of headless wooden dolls and blood have also been recorded to have fallen.

On Feb. 25 and 26 last year, a type of fish called spangled perch fell on Lajamanu, Australia. The fish were alive when they fell.

As reported by the media, scientists trying to explain the event said that fish can be sucked up into the clouds by twisters, waterspouts, or tornados, travel with the clouds, and then fall down again, landing away from their site of origin.

However, there are no bodies of water nearby Lajamanu, which is about 200 miles from the coast, and neither hurricanes nor tornados were recorded at the moment of or during the days prior to the anomaly.

This theory also doesn’t explain why only a particular animal or object would fall from the sky.