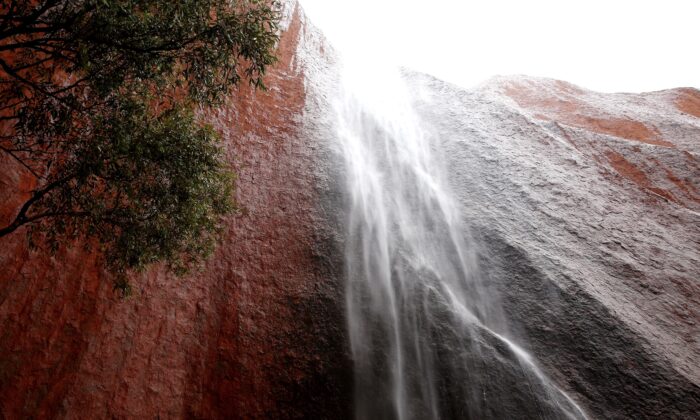 A waterfall is seen in Kantju Gorge as it rains at Uluru in Uluru-Kata Tjuta National Park, Australia, on Nov. 28, 2013. (Mark Kolbe/Getty Images)
Australia

A severe weather warning for heavy rainfall has been issued for the Northern Territory’s typically dry and arid southern regions.

The Bureau of Meteorology has warned up to 60 mm of rain could fall across the Lasseter and southern Simpson districts on Sunday as a cloud band strengthens over central Australia.

It is expected heavy downpours could trigger flash flooding.

Some 100 mm of rain could fall over the warning area in the next 24 hours, the bureau said.

The bureau said catchments were likely to become progressively saturated this weekend, with a separate flood watch alert in effect for areas south of Elliott.

The heavy rain is expected to slowly clear from the west from Monday.

Like atmospheric taps, Australia currently has two main sources of moisture: a tropical low over northern #WA, and a coastal trough off #NSW.

These two moisture feeds (green/white shades in 🛰️loop) are merging, and will create a multi-state rain and storm band from Monday. pic.twitter.com/Zuusg3QQTr

It comes as rain continues to hammer much of Australia’s east coast on Sunday, with residents in Sydney’s west told to evacuate their homes as the Hawkesbury Nepean Valley faces its worst flood threat in 60 years.