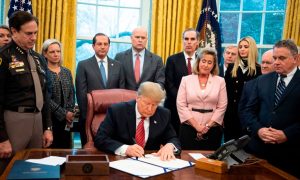 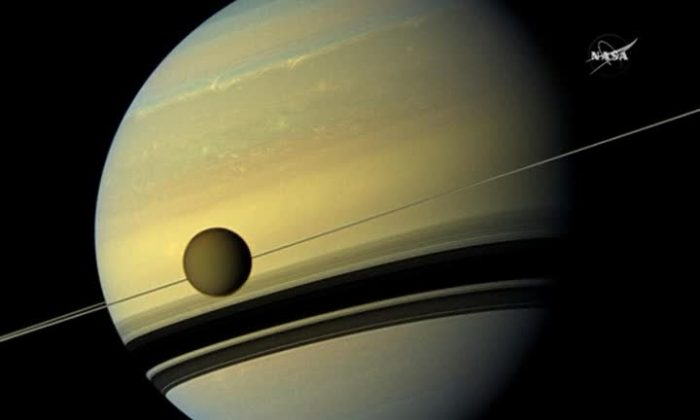 Rain Spotted on Saturn’s Moon Titan, Which May Be Home to Life

A number of scientists have speculated that Titan, the moon of Saturn, could be the home of extraterrestrial life.

Now, researchers have possibly discovered an unusual sight on the satellite: fresh rainfall.

But it wasn’t water, it was methane rain, according to a researcher at the University of Idaho.

NASA’s Cassini spacecraft captured a reflective feature near Titan’s north pole. It was taken in June 2016 and was published in Geophysical Research Letters on Jan. 16.

“It’s like looking at a sunlit wet sidewalk,” Rajani Dhingra, a student in physics at the University of Idaho, wrote in a news release.

“Additional analyses suggest the methane rain fell across a relatively pebble-like surface,” according to a news release from the university, adding that such surfaces generate “an amorphous pattern” when the liquid settles.

Dhingra said that researchers have been searching for clouds on the north pole of Saturn’s biggest moon, but they didn’t see any. “People called it the curious case of missing clouds,” she said.

“The whole Titan community has been looking forward to seeing clouds and rains on Titan’s north pole, indicating the start of the northern summer, but despite what the climate models had predicted, we weren’t even seeing any clouds,” Dhingra stated.

But then Cassini discovered a “reflective feature” that covered some 46,332 square miles, which is about half the size of the Great Lakes in North America.

“Analyses of the short-term reflective feature suggested it likely resulted from sunlight reflecting off a wet surface. The study attributes the reflection to a methane rainfall event, followed by a probable period of evaporation,” the release said.

Researchers concluded that the reflective surface is the first evidence of summer rainfall on the moon’s northern hemisphere.

“If compared to Earth’s yearly cycle of four seasons, a season on Titan lasts seven Earth years,” said the university.

Dhingra is now using the sidewalk effect observed by Cassini to look for similar events on Titan.

“We want our model predictions to match our observations. This rainfall detection proves Cassini’s climate follows the theoretical climate models we know of,” Dhingra stated. “Summer is happening. It was delayed, but it’s happening. We will have to figure out what caused the delay, though.”

In September 2018, giant dust storms were observed on Titan for the first time, according to NASA, which said the storms occurred near Titan’s equatorial regions.

“Titan is a very active moon,” said Sebastien Rodriguez with the Universite Paris Diderot, France, in the NASA news release. “We already know that about its geology and exotic hydrocarbon cycle. Now we can add another analogy with Earth and Mars: the active dust cycle, in which organic dust can be raised from large dune fields around Titan’s equator.”

The storms raise the prospect of extraterrestrial life on the moon.

NASA said there is a possibility the storms are composed of “organic molecules” due to the atmosphere’s chemistry, which is 98.4 percent nitrogen, 1.6 methane, and 0.1 to 0.2 percent hydrogen.

“Organic dust is formed when organic molecules, formed from the interaction of sunlight with methane, grow large enough to fall to the surface,” NASA wrote, adding that “while this is the first-ever observation of a dust storm on Titan, the finding is not surprising.”

In 2017, meanwhile, vinyl cyanide, which is a compound predicted to form membrane-like structures, is created in the upper atmosphere of Titan, said scientists.