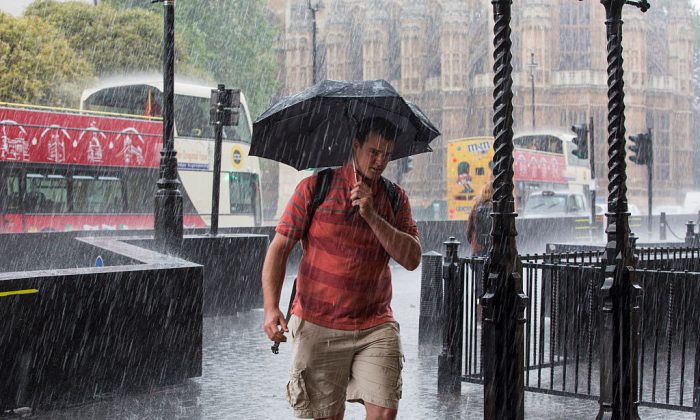 A man wearing shorts and holding an umbrella walks through heavy rain in Westminster in this file photo. (Jack Taylor/Getty Images)
UK

Rain on the Way: Thunderstorms to Hit London Amid Heatwave

After the scorching heatwave, London is bracing itself for downpours of rain.

Forecasters have issued an official warning for thunderstorms in London and across southeast England starting from 2 p.m. on Friday until midnight.

Thunderstorms, possible flooding and lightening strikes are expected, triggered by the recent hot and humid weather.

“There is a small chance that homes and businesses could be flooded quickly, with damage to some buildings from floodwater,” the Met Office said in the warning.

Forecasters said some areas could be hit by 30mm of rain in one hour in “short sharp showers.”

Sudden flooding could lead to road closures and delays to public transport during the evening rush hour.

2018 has had the driest start to summer in modern records, with just 47mm of rainfall in the UK so far.

The average daily maximum temperature in the UK from June 1 to July 16 has been 20.9 °C.

“It is certainly looking like a record-breaking summer,” Met Office spokesperson Nicola Maxey said. “It could be in the top 10 for temperature and lack of rain.”

Saturday will be cloudy at the start of the day, with more sunshine around the northwest, and an odd shower here or there, Maxey said.

She added the weather on Sunday would be better, with most areas enjoying warm and sunny weather, but some places in Scotland may experience thunderstorms, depending on the heat.

Next week the nation will experience more of an east-west divide. The East is expected to have dry sunny weather in the high 20s and low 30s. In the West, temperatures are expected to be in the mid 20s with some places in the high 20s, with a shower here or there.