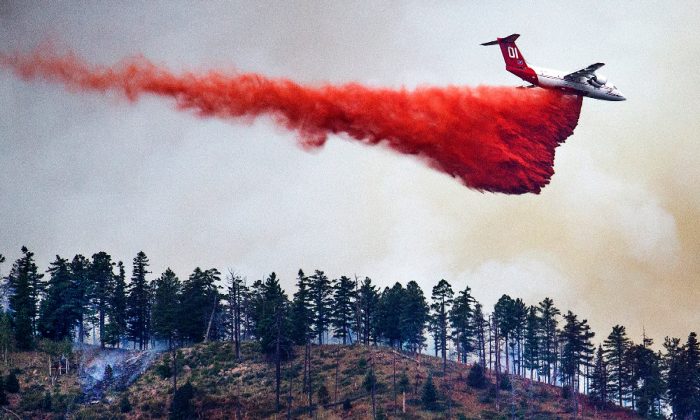 An air tanker drops retardant on a ridge overlooking the North Peak neighborhood as the Museum Fire burns north of Flagstaff, Ariz., on July 22, 2019. (Tom Tingle/The Arizona Republic via AP)
US News

FLAGSTAFF, Arizona—Light rain falling on Wednesday, July 24, in a forested Arizona city helped crews battle a wildfire that has raged for days in a mountain pass recreation area overlooking the city, officials said.

Up to 1 inch of rain was allowing ground crews to directly attack the fire, extinguish blames and build containment lines in an area where nearly 3 square miles have burned since Sunday, said fire management team spokesman Steve Kleist.

Around 600 firefighters are working to tackle a wildifre that is burning over 2.8 square miles across a mountain pass in Arizona, USA. #Wildfire #Arizona #USNews pic.twitter.com/kSctmlZzdS

But forecasters warned of possible flooding because of thunderstorms expected to drench the area on Wednesday and Thursday in the zone scarred by the fire, which has prompted anxious residents to pack up prized possessions.

About two dozen homes have been evacuated and residents of 5,000 homes were previously told they might have to leave.

Governor Doug Ducey declared a state of emergency Wednesday, freeing $200,000 in state funding for the effort to battle the blaze in the Coconino National Forest next to Flagstaff, a popular mountain getaway in the largest Ponderosa pine forest in the U.S.

On Tuesday, Flagstaff residents peered through binoculars to get a closer look at the fire that sent plumes of smoke into the air and ash into yards while helicopters buzzed overhead.

Kim Meehl’s car and her husband’s truck were packed with photo albums dating to when she was a teenager and other precious items.

She reserved the back of the car for dogs, cats and rabbits after taking goats to another pasture.

“They’re hanging with us until we have to go,” she said. “I don’t know for sure, but I’m hoping, hoping, hoping. It looks better.”

Ferrara was more worried about the mountain than her home.

“It’s the devastation to what’s going on in the vegetation,” she said. “It’s not going to come back anytime soon.”

By Paul Davenport and Felicia Fonseca