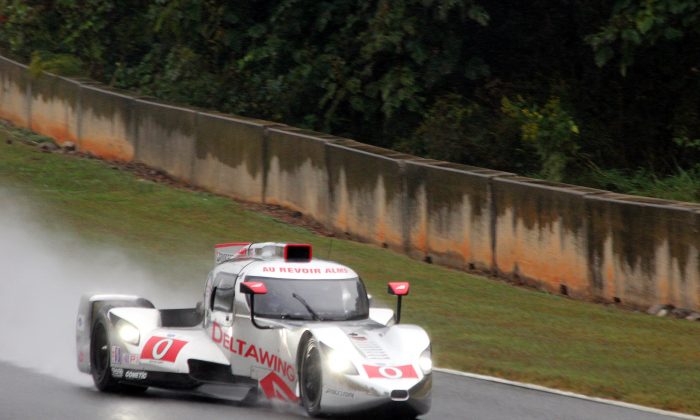 The DeltaWing LM12 coupe, with Katherine Legge at the wheel, bids “Au Revoir” to the ALMS while lapping Road Atlanta in the rain Thursday afternoon. (Chris Jasurek/Epoch Times)
Motorsports

Well, most series. The K&N Series had to cancel its two practice sessions because the cars aren’t equipped for rain—no wipers, no rain tires.

The rest of the show went on as scheduled. ALMS went out for an hour’s practice, interrupted by a few cars in the gravel. IMSA Lites and GT3 Cup both ran their opening races.

Racing in the rain cannot be adequately described. These cars race in weather which would cause road closings. Cars trail huge roostertails, obscuring the cars behind them. If spectators cannot see those cars, how can the drivers see? Yet somehow they race.

Lucas Luhr of Muscle Milk Picket Racing was quickest of the ALMS cars. He only ran three laps before parking the car, satisfied with his results and not willing to risk damage. “We went out early; I think we were three seconds quicker than everyone else—we did what we wanted to do,” said a Muscle Milk crewman.

Jan Magnussen and Tom Milner led the GT class in the #3 and #4 Corvettes—Magnussen lapped at 3:09, 33 seconds faster than his team mate. Obviously the big Dane wasn’t much bothered by the water.

Tristan Nunez was quickest in PC despite having a collision with Seth Neiman in the #44 Flying Lizard GTC Porsche in the first minute of the session. Apparently Nunez, in the #18 Performance Tech Oreca, passed Neiman cleanly braking into Turn 10a, then hit some oil and fishtailed. Neiman had nowhere to go, and both ended up in the gravel.

Nunez came back later in the session and showed that he is as fast in the wet as he is in the dry.

Spencer Pumpelly in the #45 Flying Lizard car was the quickest GTC car. No P2 car turned in a time.

Racing in the Rain: Lites and GTC

Madison Snow in the Snow/Wright Porsche won the first of the weekend’s two IMSA GT3 Cup Challenge races. The 17-year-old Snow had already locked up the series title.

The rain persisted all day, forcing the K&N series to cancel their evening qualifying session; Mazda MX 5 Cup will do on as scheduled.

ALMS night practice will also go on as scheduled, from 7 to 9 p.m.

The rain is supposed to end overnight, so Friday will be a great day to watch the Lites, GT3 Cup, and K&N races, and ALMS qualifying.

Visit the Road Atlanta website to buy tickets, or get them at the gate.