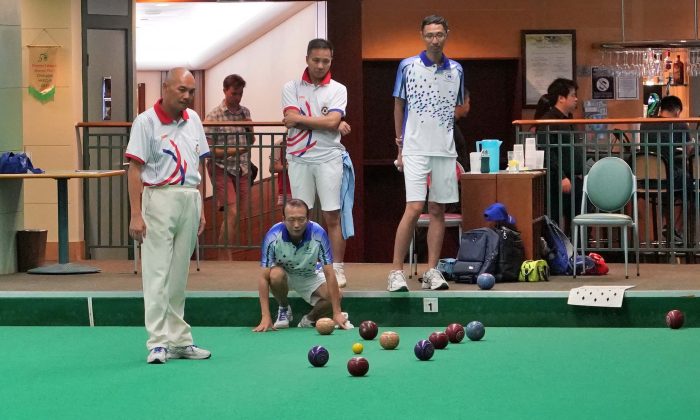 In one of the few games played over the weekend, Johnny Tsang (squatting) leads his Hong Kong Football Club to overcome a strong Kowloon Bowling Green Club team 8-0 at home to complete their clean sheet in the first half of the season. (Mike Worth)
HK Lawn Bowls

While teams are still trying to finish the games delayed or interrupted by the poor weather over the previous weekends, the continuing rain last Saturday, June 24, forced the closure of some of the outdoor greens, resulting in  16 scheduled games being postponed. After the weekend there are 33 men’s and 18 women’s games waiting to be played. In view of the massive number of games postponed, the League Panel has announced an extension of the deadline for playing the backlog of games to August 1, instead of the usual 22 days after the originally scheduled day.

Of the few Division 1 games that went ahead over the weekend, both Hong Kong Football Club teams won 8-0 at home to occupy the top two spots of the league table.   Their A team, who played all their home game in the first half because of the scheduled renovation of its indoor greens, completed their clean sheet with nine victories out of nine.  They have accumulated a total of 62 points, 17 points more than their clubmates.

At the bottom, newly promoted Club de Recreio finished the first half with only one win.  Despite the fact that they have only three points fewer than the team just out of the relegation zone, all other teams have at least a game in hand.

In Division 2, the leading teams are Filipino Club and Hong Kong Cricket Club who opened up a gap of 14 points from the chasing pack.

In the women’s section, Hong Kong Football Club have played all their scheduled games and are now leading second-placed Island Lawn Bowls Club by a point who still have two postponed games to play.

In third place, the defending champion Shatin Sports Association are 11 points further away, with only one game in hand.

Five points separate the bottom six teams but the ranking will be changed significantly once all the postponed games are played.

The second half of the season will start on August 19.