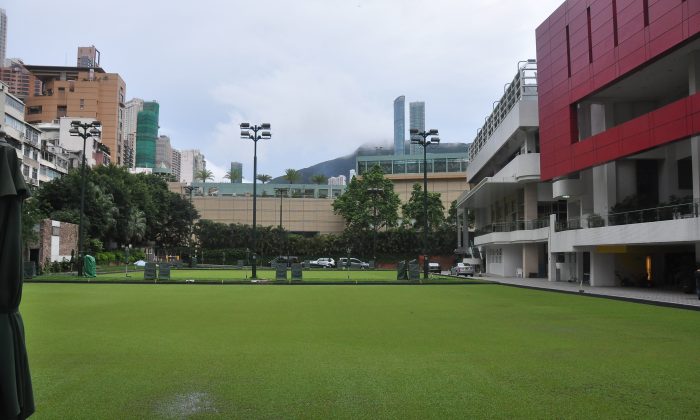 Heavy rain washed away two-thirds of the scheduled league games last weekend, May 25. The usually crowded Craigengower Cricket Club green enjoyed a rare moment of peace under the cloudy skyline. (Mike Worth)
International

For the second week in a row, a heavy rainstorm “washed out” most of the league games scheduled, creating more chaos to the already congested fixtures.

While teams are still trying to finish games that were delayed by the poor weather over the past few weeks, the heavy rain and thunderstorm last Saturday morning, May 25, forced the closure of almost all outdoor greens, causing the postponement of more games. Of the 60 Hong Kong Lawn Bowls Association Premier League games scheduled, only 24 were played over the weekend.

One of the games that went ahead involved the leader of Division 1 Kowloon Bowling Green Club (KBGC)—who played at the home green of Island Lawn Bowls Club (ILBC), which is situated at an indoor sports complex at Ap Lei Chau.

ILBC, who was promoted as the champion of the second division last year, is finding life tough in the top division. Before the weekend’s game they had already lost three times, sitting uncomfortably at second from bottom in relegation territory.

The other KBGC team, which includes Macau International James Cheng and last year’s Bowler of the Year Raymond Ho, fared better, but still lost by a single shot to Paul Choi.

Fortunately for the KBGC team, the rink led by China International Terence Lee made up for his team-mates’ losses. He won his game 23:8 against Roger Tse to win the aggregate shots.

The final result of 4-4 was enough to keep KBGC at pole position, as second-place Craigengower Cricket Club lost 6-2 at the Hong Kong Football Club indoor green. ILBC climbed up to sixth place, but played more games than the rest.

Hong Kong Football Club, who is looking for their seventh consecutive title, is now leading the table by two points, but the table does not show the full picture of the league status due to game postponements.

It is disappointing that the interesting game between HKFC and Club de Recreio (CdeR) was postponed. The game would have seen former HKFC top bowler and Hong Kong International Tammy Tham return to Sports Road for the first time since she moved to CdeR this season.