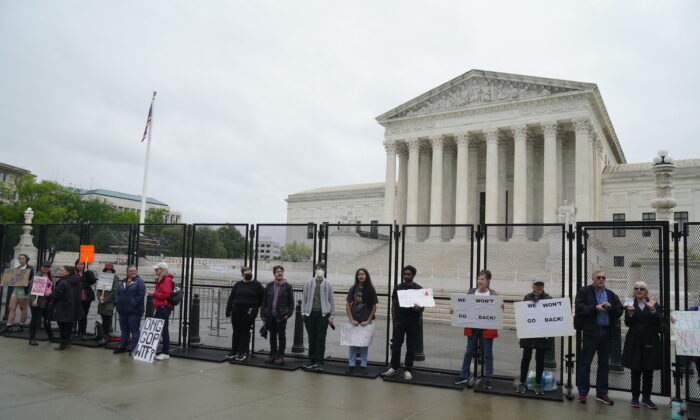 Pro-abortion protesters with signs stand in front of the U.S. Supreme Court in the rain on May 6, 2022 (Jackson Elliott/The Epoch Times)
US News

WASHINGTON—Although hundreds of pro-abortion protesters have demonstrated before the Supreme Court every night since Tuesday, less than 50 showed up on the afternoon of May 6 for a 4 p.m. protest.

The protests started after the leak of a Supreme Court opinion draft that suggests the court intends to overturn Roe v. Wade.

The likely cause of the smaller protest was the on-and-off cold rain that continued throughout the day. The protesters acknowledged the rain in their chants.

“Rain or shine, the choice is mine,” they shouted.

One pro-life protester showed up, but he left after less than a minute.

The weather still seemed to tell on the long line of women before the Supreme Court’s barricades. Chants were far shorter than usual, and people weren’t as eager to surge to the group’s microphone to lead them.

“This is [expletive] important,” said Sophia Geiger, an organizer for Extinction Rebellion, a climate change activism group. “We are not [expletive] backing down.”

“We know that Roe is the [expletive] floor. We deserve so much better,” she said.

Although Geiger led chants, the protest had much less energy to follow than on previous days.

One protester, 81-year-old Greta Gapp, said that she had protested for abortion in the 1960s in Michigan. She was one of the few protesters born before the Supreme Court decided Roe v. Wade.

“This is second time around for me,” she said. “The feeling’s the same.”

Gapp said that many of the methods of protest in the 1960s were like today’s protests.

But in 1960, pro-abortion protests were hopeful because women were getting rights, she said. Today, protesters seem angrier because women are losing the right to abortion.

“We have to do this again,” she said of the protest. “It’s just really irritating.”

Gapp said that she didn’t know what life surrounding abortion was like before Roe v. Wade.

“I don’t know if I can say exactly,” she said. “I was busy with family and everything.”

Most of the protesters had signs. Many used plays on words or witticisms. Many also relied on obscenity to make their points.

One protester, Sonya, held a sign to celebrate a new birth.

Sonya, said that despite the obscenity and darkness of the signs, they were appropriate.

“They’re dark and they’re funny and they’re dirty, because what they’re doing over there is also dirty and also dark,” she said, referencing the Supreme Court.

The leaked Supreme Court decision on abortion made the sign’s owner, who refused to be named, feel like the city of Washington was oppressive, she said.

“It just feels more oppressive and less like what I’ve always imagined it to be,” she said. “Not like a beautiful testament to our country.”

Although weather limited Friday’s protest, it likely won’t be the end. Protesters plan to demonstrate outside the homes of the six conservative Supreme Court justices next week.

“We obviously want people’s privacy to be respected. We want people to protest peacefully if they want to protest. That is certainly what the president’s view would be,” she said.

Picketing or parading with the intent of influencing a judge’s ability to discharge his duty is a crime under U.S. law.