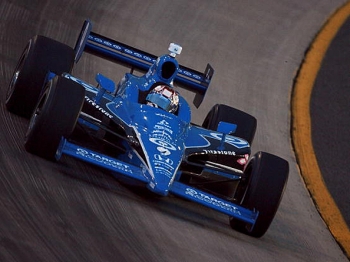 Rain and Luck Give Dixon His Third Nashville IndyCar Win

By James Fish
Print
Scott Dixon won a record-tying third win in a row at the IndyCar Firestone 200 at Nashville Superspeedway because his crew chief pondered a bit too long.

Whatever the means, the outcome is what it is: Scott Dixon takes the checkered flag at Nashville for the third year in a row.

Andretti Green Out in Force

Nashville's 1.33 mile high-banked superspeedway is paved with concrete, not asphalt, making it bumpier, slipperier and harder to drive. Drivers need to be precise and passing can be tricky—making a move and missing it can cost several places, and getting those places back can be hard work.

Helio Castroneves took the pole at Nashville, which was no surprise; but the rest of the grid contained a few faces that aren't normally seen there.

Danica Patrick finally got a car that could run, and she ran it hard, taking the number-two spot on the grid. Rookie Hideki Mutoh took the third spot, while last week's winner Ryan Hunter-Reay took fourth; another rookie, Graham Rahal, who has had his problems on oval tracks, took the tenth spot on the grid.

Rainclouds loomed over the track from the start, darkening as the race progressed. When Ryan Hunter-Reay hit the wall in lap 100 bringing a yellow, most teams gave their drivers a short load of fuel, gambling that rain would end the race and the lighter car would perform better in the few remaining laps.

On lap 132 Vitor Meira's crew chief told him to run full rich and to catch Danica Patrick, again gambling that rain would shorten the race.

Right before the rain came, Danica Patrick made a slight bobble while passing slower traffic; she got just a tiny bit too high on the track and lost traction. She did a masterful job of maintaining control, but she lost momentum, and Vitor Meira snuck underneath to take third.

Vitor Meira started in fifteenth position, and ran a great race to reach fourth spot by lap 138. Had the race gone full length, Who knows where he might have finished.

The rain stopped by lap 150, and on 151 the green came out. Under yellow Vitor Meira came in to the pits, and lost four places when a rear wheel nut stuck. Scott Dixon and Dan Wheldon stayed out under yellow, hoping that the rain would return before they ran dry.

On the restart, Helio Castroneves pushed his way forward. Castroneves pushed past Danica Patrick, on the outside no less, and then came around Tony Kanaan. Castroneves had to weave between Kanaan and Mario Moraes, a lap down. Castroneves very nearly touched Kanaan, and forced him off his line. Catroneves was gambling that the rain would hit before he ran out of gas, and thus every track position was precious, but it was a surprisingly dangerous move for the normally conservative Castroneves.

On lap 164, the rain returned, more heavily than before. The order as the yellow came out again was Scott Dixon Dan Wheldon, Helio Castroneves, Tony Kanaan, Danica Patrick, and Vitor Meara, who had passed Buddy Rice to take sixth.

After a few minutes the race was red-flagged; the drivers left their cars and the cars were covered with tarps. Half an hour later, the race was called.

Scott Dixon admitted that staying out under yellow was not an ingenious gamble; instead, it was a communication error. When Dixon received orders to pit for fuel, he was already passing pit lane; his crew had waited too long to make the decision.

In the end, this slip-up turned out to be the winning error, as Dixon and Wheldon were in the lead for just long enough. If the rain had held off for another five laps…

But luck is always a factor in racing, and luck was certainly with the Target–Chip Ganassi team at Nashville.