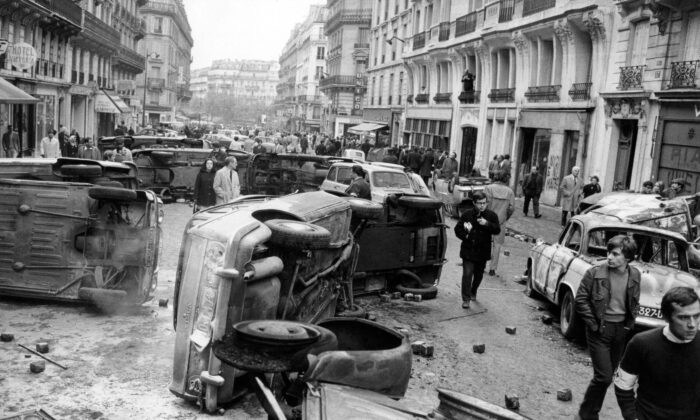 Overturned cars on Gay-Lussac Street in Paris on the morning of May 11, 1968, after violent fights between students and police the night before. (AFP via Getty Images)
Viewpoints

Rail Blockades: The Destructive Spirit of the 1968 Paris Revolt Lives On

It would seem the spirit of France’s infamous 1968 revolt, with all its delusions and lawlessness being imposed onto polite society, has been allowed to run Canadian politics of late.

The radical protesters and modern woke culprits who have blocked railroads and government buildings over the Coastal GasLink pipeline are equally as resentful as their forebears who wreaked havoc throughout the West half a century ago.

In May 1968, violent student protests erupted in Paris’s Latin Quarter. From his apartment window, British philosopher Roger Scruton, then a student in Paris, watched his peers flip over cars and tear down lamp posts and bollards and use them as barricades to protect themselves from the “fascist” police officers at whom they flung cobblestones. This state of disorder and unrest initially stemmed from “fascist” measures to restrict the young men and women on campuses from sleeping together in the dormitories. They could not abide by this bourgeois-imposed obstacle to their sexual liberation.

At this point, the need for revolution was no longer only rooted in the classic Marxist analysis of class conflict. That wouldn’t be enough for the revolutionary appetite for struggle. As Scruton summarized it, the revolution was to be rooted also in an entire deconstruction of Western society, since every aspect of that society upheld the capitalist order. It was the perfect way for well-off students to claim solidarity with communist tyrants they idolized—Ho Chi Minh, Mao Zedong, Che Guevara—as they played out their fantasies on university campuses or in the streets.

Power could be located everywhere and in everything. Therefore, there was an endless list of things from which to emancipate oneself, creating an undying urge to rage at all things hierarchical or tradition-bound.

This is the essence of the spirit of ’68. Gerd-Rainer Horn’s 2007 book “The Spirit of ’68: Rebellion in Western Europe and North America, 1956-1976” describes it thus: “In Italy, France, Spain, Vietnam, the United States, West Germany, Czechoslovakia, Mexico, and elsewhere, millions of individuals took matters into their own hands to counter imperialism, capitalism, autocracy, bureaucracy, and all forms of hierarchical thinking.”

The simplicity of this spirit of rebellion explains its appeal to idealistic youth who feel as if history is inevitably moving in a revolutionary direction. It takes what could be legitimate issues (institutionalized racism, sexism, etc.) and builds a narrative suggesting that these problems are endemic in the system and can only be reversed by destroying and rebuilding it.

One primary aspect of such efforts is what Yuri Bezmenov, a former Soviet spy who defected to Canada, called demoralization, which is delegitimizing the state by subjecting people to ideological subversion that will alter their entire perception of reality and make them unable to look at anything objectively.

Those possessed with the spirit of ’68 have never been able to attain the reins of political power the way they’d like, but they have understood the importance of hegemonizing society’s institutions to exercise influence. Due to the infiltration of Marxist ideology in universities, these institutions have remained the laboratory and recruitment centre for radicals. The subversive agenda of most of the humanities is obvious, as any patriotic scholarship is omitted so as not to interfere with the effort to convert students to the revolutionary religion.

The fact that millions of former students were influenced by this ideology has, over decades, led to fundamental changes coming about in society, so that today, radicals feel empowered to engage in unlawful acts like the rail blockades.

Underpinning this are the ideas put forth by scholars of “settler colonialism,” another field by which a radical can deconstruct society. Contrasting it with conventional colonialism, scholar Patrick Wolfe describes settler colonialism as “a structure rather than an event.” Of course, egregious injustices have been visited upon Indigenous people, but the scholarship puts forth the idea that all institutions as they exist now only function as an agent of the ongoing “settler colonial” conspiracy. And all non-Indigenous Canadians are “settlers” who are complicit inasmuch as they’re beneficiaries of the enterprise.

This thinking can result in notions such as the belief that the rule of law has been “weaponized” by the Canadian colonial-state against Indigenous people. In an op-ed in Canada Dimension, Pam Palmater, an associate professor and chair in Indigenous Governance at Ryerson University, writes: “Canada makes and breaks laws to suit its own economic and political interests, which run counter to those of Indigenous peoples. It is time to be honest about it, and call out Canada as an outlaw, and take action to support the Wet’suwet’en Nation, who have occupied their lands since time immemorial.”

What’s perilous in this rhetoric is the “uprising or nothing” type of approach to reconciliation. The solution often prescribed is some form of “decolonization,” which can act as a sort of demoralization and destabilization as it polarizes the population. Everything in Canadian society is tainted with colonialism and must be purified.

But where does this end? When all the land is returned and Canadians board ships back to Europe? There isn’t a clear answer to that. It’s impossible to have the discussion, as any attempt to offer a realistic solution is instantly rejected by the decolonization camp. The inevitable conclusion is that anything less than a full-on “settler submission” to revolution is not good enough.

It should go without saying that reliance on “dialogue” or hesitation to enforce the law will only embolden those behind the blockades. Given that nearly two-thirds of Canadians disagree with the blockades, according to an Ipsos poll, there may be political consequences.

In 1968, in response to the rising radicalism and violence in the United States, then-president Richard Nixon formed much of his campaign around the idea of restoring “law and order,” arguing in his presidential nomination acceptance speech that it was necessary for progress. He ended up winning the election, with his strong law-and-order stance being no small factor. Canadian politicians would be wise to take note.

This article has been updated to show that in the 1968 U.S. presidential election, Richard Nixon won by a narrower margin than stated, with law and order being a major part of his campaign. The Epoch Times regrets the error.