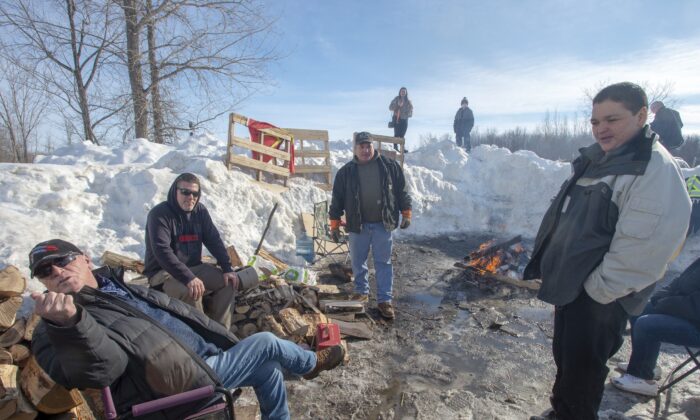 Members of the Mohawk community man a blockade of the commuter rail line in Kahnawake, Quebec, on Feb. 12, 2020. (The Canadian Press/Ryan Remiorz)
Viewpoints

Last weekend my wife and I returned from a mid-winter break that took us by air from Montreal to San Francisco, by sea down the Pacific coast, through the Panama Canal, past several Caribbean Islands, and up to New York City where we had booked Amtrak rail tickets for the trip back to Montreal.

Throughout the trip, Wi-Fi access had been limited and we had no news from Canada. Our travels were worry-free and went without a hitch—until we arrived in Manhattan for a one-night stay in preparation for an early morning Amtrak rail departure back to Montreal.

Once we had access to Canadian news sources, things looked less promising for the final leg of our voyage. We learned that about a week before our arrival in New York, the RCMP had begun enforcing an injunction to prevent a dissident group of Wet’suwet’en hereditary chiefs from interfering with the lawful construction of a natural gas pipeline in northern British Columbia.

In the wake of RCMP arrests, acts of civil disobedience spread across the country. The hereditary chiefs maintained that no pipelines could be constructed without their consent. Despite agreements that had already been reached between elected Indigenous band councils, the chiefs are seeking to block construction for the foreseeable future.

As rail blockades and disruptions escalated in parts of B.C. and Ontario as well as in Montreal, CN Rail shut down its operations in Eastern Canada. After CN said it could not support its operations amid the blockades, Via Rail announced the suspension of nearly all of its train service across the country.

In the meantime, thousands of rail ticket-holding Canadians asked themselves: What on earth do we do now? As it happened, our particular travel dilemma paled in comparison to the impact across the nation.

The impasse is threatening to put 6,000 employees at CN and other rail companies out of work as well as disrupt supply chains for businesses and consumers throughout the country. “Our union—and thousands of working families—are in crisis,” said Teamsters Canada president Francois Laporte. He urged Ottawa to help find a solution as soon as possible.

Opposition Leader Andrew Scheer has said that the government should follow the will of the majority of B.C. First Nations communities who have approved the construction of the pipeline.

With regard to non-indigenous activists who were involved in disrupting transportation across the country, he told reporters: “These protesters, these activists, may have the luxury of spending days at a time at a blockade, but they need to check their privilege, they need to check their privilege and let people whose job depends on the railway system—small business, farmers—do their job.”

But the impact on the ordinary train traveller or businesses depending on rail to move goods across Canada was not the first thing on the minds of Canada’s academic and media elites. CTV reported that Indigenous rights activist Pam Palmater, the chair in Indigenous Governance at Ryerson University, responded to Scheer’s comments by saying the Conservative leader “needs to check his own white privilege and his blatant racism and disdain towards First Nations.”

Throughout the week, accusations of racism and white privilege against anyone who questioned the position of the Wet’suwet’en hereditary chiefs were ubiquitous. Writing in The Toronto Star, Alex Boyd said it was no coincidence that Wet’suwet’en protesters are targeting railways. The protestors had told him so. He reported that Nikki Sanchez, an Indigenous activist who was part of the six-day encampment at the B.C. legislature, said there’s “historic irony” to the fact that railways were the infrastructure that was shut down as part of this movement.

“It’s very historically significant because the project of colonization, as well as the extinction of the buffalo, was facilitated by the laying down of the Trans Canada railway,” Sanchez said.

It’s about bigger things: colonization, oppression, saving the planet from capitalism, and all the other intersecting post-modern Marxist themes that have filled the pages of Canada’s schoolbooks since the 1970s.

When all of a nation’s formative institutions dedicate themselves to developing an uncritical leftist revolutionary disposition among our best-educated young people, it shouldn’t come as a surprise that they will be capable of enormously cruel indifference toward the plight of the ordinary guy on the train.