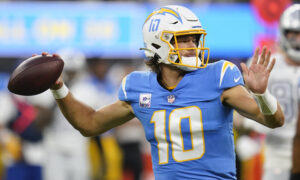 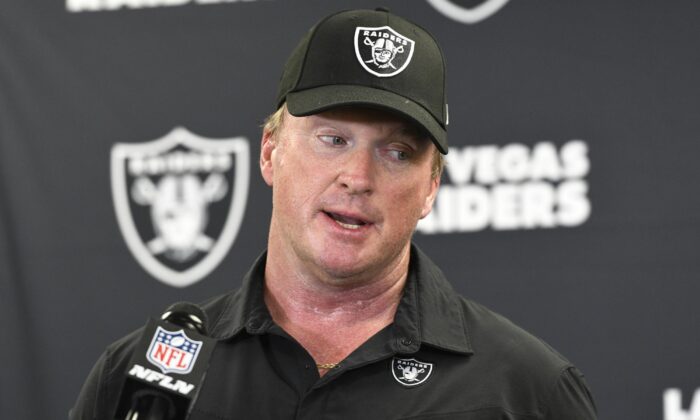 Jon Gruden resigned on Monday as the head coach of the Las Vegas Raiders after reports emerged of him using offensive language in numerous emails he sent about a decade ago.

“I have resigned as Head Coach of the Las Vegas Raiders. I love the Raiders and do not want to be a distraction. Thank you to all the players, coaches, staff, and fans of Raider Nation. I’m sorry, I never meant to hurt anyone,” Gruden said in a statement issued by the Raiders.

Mark Davis, a U.S. businessman and the owner of the NFL team, announced in a brief statement he has accepted Gruden’s resignation. The team said that assistant head coach Rich Bisaccia will serve as interim head coach, effective immediately.

“Coach Bisaccia will meet with the media at the regularly scheduled media availability on Wednesday,” the team said as they confirmed Bisaccia’s new position.

Last week, Gruden was placed under investigation by the NFL after 10-year-old emails surfaced of him using a racist term to describe NFL union chief DeMaurice Smith, as well as rude criticism on NFL commissioner Roger Goodell, ESPN reported.

Gruden, who is in his fourth year of a 10-year, $100 million contract he signed with the Raiders in 2018, was working as a broadcaster for ESPN at the time he reportedly used offensive language in the emails.

The emails were discovered in a workplace misconduct investigation into the Washington Football Team but ended up costing Gruden his job when they also showed Gruden denounced the drafting of a gay player and criticized players who protested alleged racism and police brutality during the playing of the national anthem.

Gruden apologized for his “insensitive remarks” about Smith, saying they were made out of frustration over the 2011 lockout. The emails also included inappropriate language towards another handful of team owners that were involved in the labor disagreement that led to a lockout at the time.

Gruden told ESPN he “never had a racial thought” when writing the emails, which included Gruden referred to Smith’s lips as being “the size of michellin tires,” according to The Wall Street Journal, which had reviewed the email in question.

“I’m embarrassed by what’s out there. I certainly never meant for it to sound that bad,” he said, adding that he routinely used the term “rubber lips” to “refer to a guy I catch as lying … he can’t spit it out.”

Raiders owner Davis said last week the emails about Smith are “disturbing and not what the Raiders stand for,” adding that the team is currently reviewing additional emails.

Additional emails from Gruden are currently being reviewed due to reportedly containing “racist, homophobic, and misogynistic comments” about Goodell, Michael Sam, Eric Reid, and President Barack Obama and then-vice president Joe Biden, among others.

Gruden has a 117-112 career record but hasn’t won a playoff game since the Super Bowl victory over the Raiders in the 2002 season.

Bisaccia, the interim head coach, has been a special teams coordinator in the NFL for 19 seasons with the Raiders, Chargers, Dallas, and Tampa Bay. He has no head coaching experience but his elevation will allow other assistants such as defensive coordinator Gus Bradley to stay in their current roles.