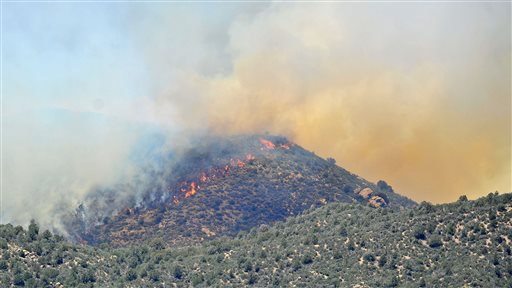 Flames from the Doce fire climb over a hillside near the Granite Basin area outside Prescott, Ariz. on Tuesday, June 18, 2013. County sheriff's officials say the wildfire began midday Tuesday near the Doce Pit about eight miles northwest of Prescott. Wind gusts of up to 22 mph pushed the fire from 20 acres to about 200 within an hour. (AP Photo/The Daily Courier, Matt Hinshaw)
Colorado Wildfires

Wildfires in the western and midwestern United States burned over 100,000 acres last week.

But this week crews began containing them, especially the largest and most destructive one–the Black Forest Fire near Colorado Springs, which burned over 14,000 acres and forced more than 40,000 people to evacuate.

Other large fires–two in New Mexico and two others that combined into one larger fire in eastern Oregon–are completely (Oregon) or almost completely (90 percent for the New Mexico fires) contained.

The only fire right now that is large and still largely uncontained is another fire in New Mexico, the Silver Fire, which is in the Gila National Forest and has threatened the historic silver mining town of Kingston, forcing its 25-45 residents to evacuate. The Silver Fire has grown to 30,300 acres as of June 19, and officials in charge of the firefighting crews say the fire could grow another 2,000 to 6,000 acres today.

Additionally, a fairly large 7,000 acre fire started on Arizona around noon on June 18, started by a human. The Doce Fire has forced hundreds from their home in the area, northwest of Prescott.

“It’s very close. No doubt about it, it’s a real natural disaster, there’s a lot of chaos out there with the public at this time,” Jeff Andrews, with the U.S. Forest Service, told the local Fox station.

A team including four helicopters and 512 personnel are battling the fire, which is zero percent contained.