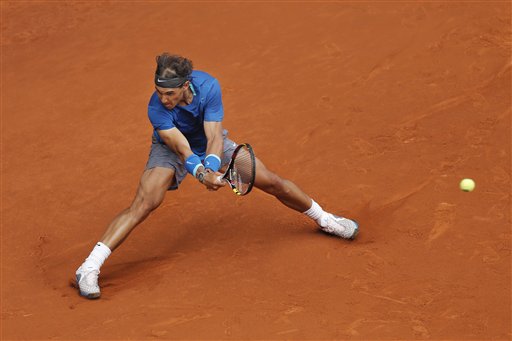 Rafael Nadal is set to face Tomas Berdych in the 2014 Madrid Open tennis tournament on Friday.

The game is available via live stream through ATP.

La Sexta will be broadcasting the game in Spain, BSkyB in the United Kingdom and Ireland, Tennis Channel in the United States, and Canal + in Much of Africa and France. See a full list of broadcasters below and a preview from the Associated Press below that.

MADRID—Serena Williams and Rafael Nadal breezed into the Madrid Open third round with their title defenses facing little strain on Wednesday, while Andy Murray made a successful return to clay after nearly a year’s absence.

Williams broke Shuai Peng three times in a 6-2, 6-3 win that was her 14th straight on the clay of the Magic Box tennis center, where the top-seeded American dominated her Chinese opponent on serve by firing 11 aces.

Williams, who moves on to face Spanish player Carla Suarez Navarro, looked fresh and focused while dismissing any injury fears despite a heavily wrapped left leg.

“I just had some issues and went preventive to make sure I didn’t make anything worse,” said Williams. “I’m literally taking it one day, one match at a time, and not putting any pressure on myself.”

Nadal, meanwhile, certainly fed his confidence with a 6-1, 6-0 victory over Juan Monaco of Argentina, just what the top-seeded Spaniard needed after coming to the Spanish capital on his worst clay run in a decade.

Nadal, the greatest ever player on the red surface, failed to advance past the quarterfinals of his last two clay tournaments. But after Monaco broke to get to within 2-1, Nadal did not relent as he didn’t drop another game at Manolo Santana center court.

“Each victory helps to raise your confidence,” Nadal said. “I started a little nervously in my movement. I think I moved better and played well, better than I normally play on the clay. I was dominating over the points and playing very well.

Nadal’s hopes of winning a second clay event after his triumph in Rio de Janeiro this year were bolstered on Tuesday when Australian Open champion Stanislas Wawrinka lost and Roger Federer withdrew for the birth of his second set of twins. Second-ranked Novak Djokovic was absent to injury.

“I didn’t even get to the necessary round to face them at the last tournaments,” saidNadal, dismissing his chances despite the marquee absentees. “Every rival is difficult.”

Nadal, who faces Jarrko Nieminen of Finland next, could be on course to meet Murray in the semifinals after the Scot overcame Nicolas Almagro in a 6-1, 1-6, 6-4 victory.

Murray, who won the event in 2008 when it was held on hardcourt, hadn’t played on clay since Rome last year but looked at ease in taking the first set.

But Almagro rallied to force a deciding set, which Murray won when his Spanish opponent slapped a backhand wide down the line for a 39th unforced error.

Also, Tomas Berdych moved to a perfect 11-0 against Kevin Anderson following his 6-1, 6-4 win over the South African, while American John Isner was also victorious in his second round match.

Eleventh-seeded Frenchman Jo-Wilfried Tsonga was beaten 6-4, 6-3 by Colombian player Santiago Giraldo, who was coming off his appearance in the Barcelona final.

In other women’s results, third-seeded Agnieszka Radwanska of Poland and No. 4 Simona Halep of Romania both advanced, while Roberta Vinci of Italy knocked out Caroline Wozniacki 6-3, 6-3.

Andy Murray returns to the clay for the first time in nearly one year later Wednesday against Nicolas Almagro. David Ferrer, the next highest remaining seed after Nadal at No. 5, faces John Isner.