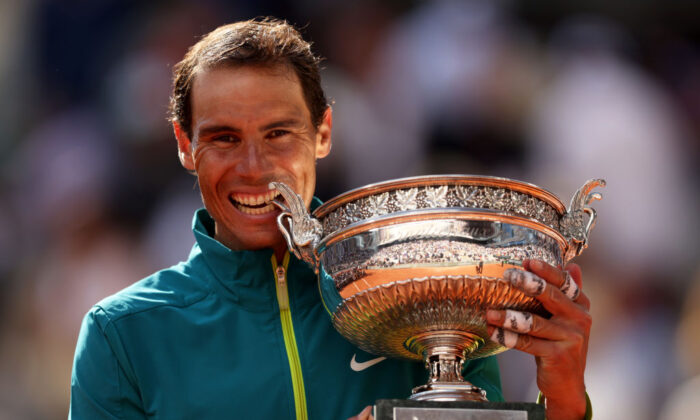 Rafael Nadal of Spain bites the trophy after winning against Casper Ruud of Norway during the Men's Singles Final match on Day 15 of The 2022 French Open at Roland Garros in Paris, France, on June 5, 2022. (Clive Brunskill/Getty Images)
Viewpoints

Rafael Nadal: The GOAT of Tennis?

Rafael Nadal won his 14th Roland Garros tennis crown on June 5. It was also his 22nd Grand Slam victory, which sets him apart from Novak Djokovic and Roger Federer, who each have 20 Grand Slams trophies.

The final between Nadal and Ruud turned into a majestic exhibition match, which brought the best out of both contenders. But in the end, Nadal prevailed in three sets, his 14th victory on the red clay court, also known as the terre battue in Paris. He never lost a final of the French Open tennis tournament in Paris.

Nadal progressed to the final when his 25-year-old semi-final opponent on June 3, Alexander Zverev, had to retire in their second set when he turned his ankle. Zverev left the Court Philippe-Chatrier in a wheelchair after seriously injuring himself in an attempt to intercept a Nadal volley. Nadal had won the first set in a tie-break and was preparing for another tie break in the second set when Zverev’s unfortunate accident occurred. It was a titanic struggle that captivated the huge audience that witnessed the clash between these two titans of the sport—only to be cut short because of Zverev’s tragic misadventure.

Nadal celebrated his 36th birthday on this fateful semi-final day when he progressed to the final after more than three hours of intense tennis. It is utterly amazing that a player who is 36 years of age is still able to win long rallies on the Paris gravel, even if it is Nadal’s favourite tennis surface.

There has been incessant speculation regarding the Greatest of All Time, better known as the GOAT, of tennis. These speculations have not diminished since Nadal’s win in Paris but, instead, have spawned theories about the statistical chances of Nadal, Djokovic, or Federer to eventually emerge as the GOAT.

In this context, tennis commentators admire the human ability to suffer and still triumph, which appears to be unlimited, provided there is eternal glory at the end of it. Nadal has provided evidence, on numerous occasions, that he possesses an unusual ability to persevere even in the face of defeat. He demonstrated this again in the semi-final when he was 6-2 behind in the tie break, and yet Zverev was unable to successfully convert this advantage into winning the first set.

The tennis world is transfixed by the unending tussle between Djokovic, Nadal, and Federer to become the GOAT of tennis. Nadal has now battled his way to an unbelievable 22 Grand Slam victories, including 14 at Roland Garros, four U.S. Open, two Wimbledon, and two Australian Open.

It is unlikely that Federer will ever be able to catch up or improve on Nadal’s record. Indeed, winning another slam will be difficult for Federer because at his age—he is 40 years of age—a certain sluggishness will inevitably develop, making it tough to compete with younger athletes for Grand Slam victory.

Yet, Federer is an incredible, superbly talented, and likable champion who made Wimbledon his personal hunting ground for glory. So, if he decides to participate in the Wimbledon tournament later this month, he might still go far and surprise most sceptic commentators.

Novak Djokovic, the intrepid tennis warrior and great Serbian champion, certainly has his sight on the GOAT crown. But achieving this aim will be a challenging task. Djokovic is 35 years of age, and, as age decreases a player’s ability to play consistently at the highest possible level needed to win a Grand Slam—which often requires a five sets effort—he might find it challenging to equal or better the Nadal record.

Indeed, Djokovic must now win three Grand Slams to exceed Nadal’s tally. This is a huge task, considering there are truly gifted new generation players who are impatiently waiting to dethrone the three aging tenors of tennis. Indeed, Alexander Zverev, Daniil Medvedev, Stefanos Tsitsipas, Felix Augur-Alliassime, Casper Ruud, and others, all of whom are capable of defeating Djokovic on a good day, are attempting to defeat the Serbian champion.

At the final of the U.S. Open in 2021, Medvedev already triumphed over Djokovic. And, of course, this analysis assumes that Nadal will not add to this total tally of 22 Grand Slams.

Nadal is an incredible champion who capably deals with adversity and somehow turns it into an opportunity. Prior to his participation in this year’s Roland Garros tennis extravaganza, he battled an incurable left foot injury, which flares up periodically and makes it impossible for him to play a game without suffering unbearable pain. He also had a broken rib, but, nevertheless, he was ready to face the best players in the world on his preferred tennis surface, the terre battue.

In his quest for a 14th Crown, he defeated an impressive range of top 10 players to win the final. In the fourth round, in an enthralling five-setter, he defeated Felix Augur-Alliassime—who is coached by Nadal’s previous coach and uncle, Toni Nadal. Djokovic lost to Nadal in the Quarter Final. Djokovic graciously indicated in his post-match interview that Nadal “was a better player, I think, in important moments.” And Zverev, unfortunately, had to retire in his titanic semi-final battle with Nadal, who then preceded to win the Grand Final against a tenacious Casper Ruud.

One piquant detail is that Ruud trained in Nadal’s tennis academy in Mallorca. And as an emerging player, he idolised Nadal. Ruud thus knows his older nemesis well, but beating him, is still another, and thus far unsuccessful, challenge.

Rafael Nadal is the undisputed tennis GOAT, at least for now.