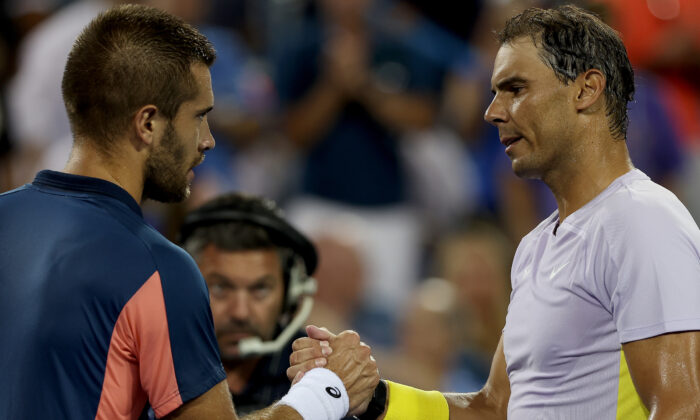 Borna Coric of Croatia is congratulated by Rafael Nadal of Spain after their match during the Western & Southern Open at Lindner Family Tennis Center in Mason, Ohio, on August 17, 2022. (Matthew Stockman/Getty Images via Field Level Media)
Tennis

Nadal lost his opening match at the Western & Southern Open in Mason, Ohio, falling to Croatia’s Borna Coric 7–6 (9), 4–6, 6–3 on Wednesday in second-round action.

Nadal, the reigning French Open champion, received a first-round bye as the tournament’s second seed. The Spaniard was the 2013 champion in the Cincinnati-area event. He was playing his first match since he was forced to withdraw from Wimbledon ahead of the semifinals due to an abdominal tear.

Neither player broke serve in the opening set, and Nadal had the first two set points in the tiebreaker. Coric saved both of those, then converted his third set point.

Nadal broke serve for a 4–3 lead in the second set and subsequently leveled the match. The third set also featured just one break, when Coric went in front 4–2.

Earlier Wednesday, Americans Ben Shelton and John Isner put on a show for the home crowd as they both pulled off upset wins.

Playing on a wild-card entry, Shelton toppled fifth-seeded Casper Rudd of Norway 6–3, 6–3. Shelton, the reigning NCAA singles champion out of Florida, won 22 of 26 (84.6 percent) of his first-serve points while winning all nine of his service games.

At just 19 years old, Shelton is in his ATP Masters 1000 debut at the Cincinnati-area event. Although he’s looked comfortable up to this point, he’s still getting adjusted to playing against the best that the tour has to offer.

“I think you’ve got to fake it till you make it, right?” Shelton said. “If I’m not feeling completely comfortable at the beginning, I’m going to do my best to show that I am until I find myself in a place where I am settled in.”

“I’m finding it an easier time the more I’m in these situations, getting my heart rate down and feeling more calm on the court.”

Isner picked up a 7–6 (5), 6–7 (5), 6–2 victory over No. 8 seed Hubert Hurkacz of Poland. The second-round match had to be paused, though, when a ball boy fainted on the court, prompting both Isner and Hurkacz to offer assistance.

“From what I hear, the kid is going to be OK and hopefully he’s getting some fluids and in the air conditioning right now resting up,” Isner said.

No. 11 seed Taylor Fritz of the United States was also a winner, beating Australian Nick Kyrgios 6–3, 6–2.

But not every American prevailed in their second-round contest, as Tommy Paul fell to Canada’s Dennis Shapovalov 3–6, 6–4, 6–3, and qualifier Marcus Giron was on the losing end of a 6–3, 6–3 result with 15th-seeded Spaniard Roberto Bautista Agut.

Aside from Rudd and Hurkacz, other seeded competitors took care of business.

In other action, No. 9 seed Cameron Norrie of Great Britain battled back to edge fellow countryman Andy Murray 3–6, 6–3, 6–4.

The final match of the night was an all-U.S. encounter that Sebastian Korda won 4–6, 6–1, 6–4 over Frances Tiafoe.