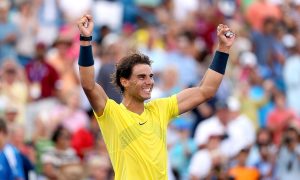 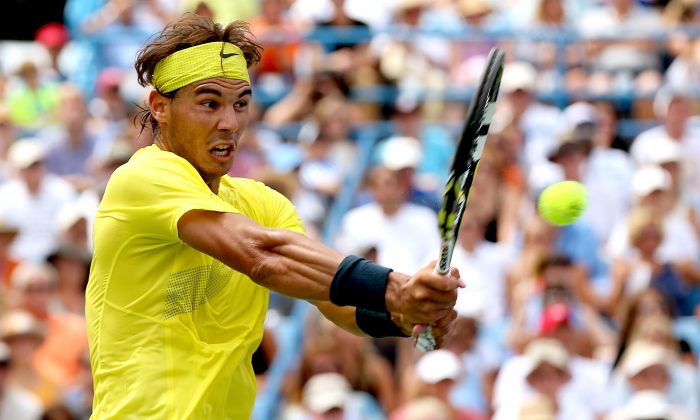 Rafael Nadal of Spain returns a shot to John Isner during the final of the Western & Southern Open on August 18, 2013 at Lindner Family Tennis Center in Cincinnati, Ohio. (Matthew Stockman/Getty Images)
Sports

Rafael Nadal faced the power of John Inser in the finals of the Western and Southern Open tennis tournament in Cincinnati Sunday and triumphed, beating the towering American in straight sets.

It Nadal’s first win in Cincinnati, and his ninth title of the season after , coming back from a seven-month layoff to heal his left knee.

Nadal did not dominate; both players held serve through the first set, where Nadal won the tie break. Nadal couldn’t control Isner’s powerful serve or equally powerful forehand, but Isner also found himself being beaten by Nadal’s serve-and forehand combination, as the 27-year-old Spaniard mixed his service, going up the middle when Isner, 28, expected serves wide.

After the match, Rafael Nadal, ever gracious, thanked the organizers, particularly the volunteers who work so hard behind the scenes to make tournaments run smoothly.

“It is just amazing; very happy for everything,” Nadal told CBS. “All I can say is, ‘Thank you very much’ to the organization to make possible this very great event … all the volunteers, all the people who work in the is tournament to make us feel like home.”

“Unfortunately for me I didn’t have the chance to play very well during all my career games at Cincinnati—this year was the first one where I felt I was really playing well.”

Nadal also congratulated his opponent, mention the difficult opponents Isner had to beat to reach the finals, and apologized for having to beat him for the trophy..

“Sorry for today, but I m really sure if you continue serving like this and playing forehands like this you will have a lot of chances to win in tournaments like this one.”

Isner’s serve lacked a bit of punch in the second set, and with his main weapons weakened, the 21-ranked American (who will crack the top 20 when Monday’s ranking are posted) was at a disadvantage. Even so Isner fought to break point in the seventh game of the second set; Nadal responded by coming to net for a pair of winning volleys

Nadal came within two points of winning the match in the tenth game; this time it was Isner who fought back, making tow great second serves and following them up with unreturnable forehands.

The second set went to a tie break, and here Nadal’s consistency made the difference. Under pressure, Isner started missing, and lost a little of his competitive edge. The Tie break went to five-one Nadal; then Isner made a pair of points, but it was too late.