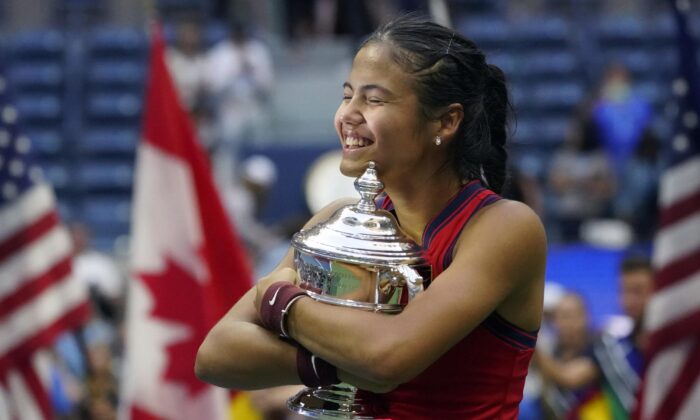 British teenager Emma Raducanu moved up 127 spots in the Women’s Tennis Association (WTA) rankings on Monday after a memorable game against Leylah Fernandez on Sept. 11 at the U.S. Open finals in New York.

The 18-year-old qualifier was ranked No. 150 before traveling to the United States and contesting in her second-ever Grand Slam tournament, in which she won all 20 sets across 10 victories—three in qualifying and seven in the main draw.

Raducanu’s win over 19-year-old Fernandez from Canada in straight sets 6-4 6-3 marks her the first qualifier to ever win a Grand Slam, in either the men’s or women’s game.

The teenage sensation vaulted up in ranks as she became Britain’s first female Grand Slam champion in 44 years, while also becoming the new British No. 1 and climbing 127 spots to a career-high No. 23 in the WTA rankings.

“I think this final shows that the future of women’s tennis and just the depth of the game right now is so great,” Raducanu said during the on-court ceremony.

“I think every single player in the women’s draw definitely has a shot to win any tournament,” she continued. “I hope that the next generation can follow in the steps of the greatest legends—like Billie Jean King—and everyone who is at the top of the game right now.”

Fernandez also made a big jump in the WTA rankings, going from 73rd to a career-best 28th.

Karolina Pliskova is now No. 3, and Elina Svitolina is No. 4 after each moved up a spot by getting to the quarterfinals in New York.

Raducanu is now the youngest Grand Slam champion since 17-year-old Maria Sharapova’s triumph at Wimbledon in 2004. With her U.S. Open title, she also became the first British woman to win a Grand Slam title since Virginia Wade won Wimbledon in 1977—and the legend herself was in attendance at Arthur Ashe Stadium on Sept. 11 to witness the teen’s achievement.

“It means so much to have Virginia here and also Tim [Henman],” Raducanu said. “To have these British legends and icons for me to follow in their footsteps really helps, and it gave me the belief to actually do it.”

The teens’ victory was hailed by many, including British Prime Minister Boris Johnson, who wrote on Twitter: “We are all hugely proud of you,” as he praised the new British No. 1’s skills in the sport.

“What a sensational match!” Johnson said. “You showed extraordinary skill, poise, and guts and we are all hugely proud of you.”