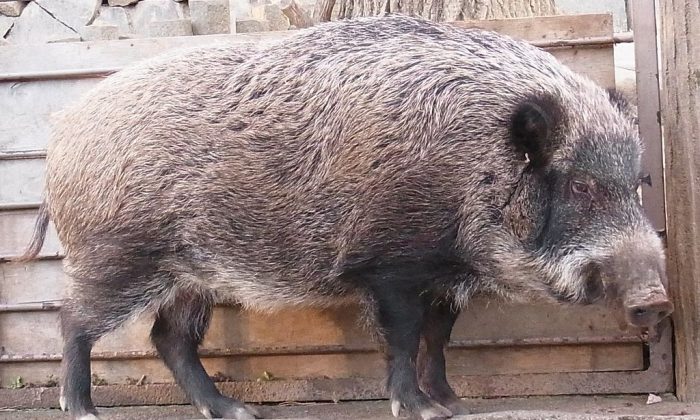 The wild boar population near the crippled Fukushima Daiichi nuclear plant have bred uncontrollably in the past five years since the massive 2011 earthquake.

The radioactive boars have ran amok in the area surrounding the Fukushima Nuclear disaster zone in northern Japan, destroying local agriculture as well as eating nuclear-contaminated food near the accident site, according to The Independent.

Since the disaster, agriculture damage done by the boars has totaled hundreds of thousands of dollars, reported the Times of London.

Boars have also injured several locals while roaming the streets over the past few years.

One boar down. Hunting season in Japan <3 pic.twitter.com/5lbZEpQEQd

The boars also don’t have any natural predators to keep their population in order. Since 2011, no humans have been able to live in the Fukushima zone. Big hunting parties have been organized all over Japan to cull the population.

And the wild pigs are now being killed faster than people can bury them. Three mass graves that are big enough for 600 boars a piece are almost full in the city of Nihonmatsu, located 35 miles from the Fukushima plant.

“Sooner or later, we’re going to have to ask local people to give us their land to use,” said Tsuneo Saito, a local hunter, as quoted by The Independent. “The city doesn’t own land which isn’t occupied by houses.”

At one time, boar meat was considered a delicacy in Japan, but that’s no longer possible due to the zone’s nuclear contamination.

Scientists from the Fukushima University Environmental Radioactivity Institute, told the Japanese Mainichi daily newspaper in March: “Wild boar along with raccoon have been taking advantage of the evacuation zone, entering vacant houses in areas damaged by the [disaster], and using them as breeding places or burrows.”

This isn’t anything new. In the years following Ukraine’s Chernobyl nuclear disaster, the population elks, wolves, bears, and lynx increased without humans around.

“That wildlife started increasing when humans abandoned the area in 1986 is not earth-shattering news,” Tom Hinton, an expert who has studied the aftermath of Chernobyl, told the Washington Post.

“What’s surprising here was the life was able to increase even in an area that is among the most radioactively contaminated in the world.”