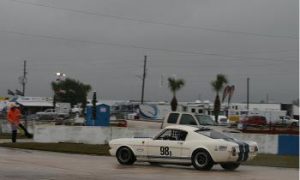 Racing Legends Roar to Life: The Sebring Fall Classic
0
US

The New Jersey Department of Environmental Protection (NJDEP) announced last week that it is launching an effort to clean up tritium that leaked from Oyster Creek, the nation’s oldest nuclear power plant, last April, in Lacey Township, New Jersey.

According to the NJDEP statement, "180,000 gallons of contaminated water was released from the plant on April 9, 2009, through two small holes in separate pipes."

Lawrence Ragonese, spokesperson for the NDJEP, told The Epoch Times that in the past two weeks the department had become "aware that this leak of tritium had escaped from the surface aquifer … escaped its containment, and made its way into the lower aquifer, the Cohansey aquifer.”

Traces of the radioactive atom tritium were found in the Kirkwood–Cohansey Aquifer, a major drinking water supply for much of southern New Jersey.

The tritium levels found in the aquifer exceed EPA standards by fifty times according to the NJDEP.

There is no immediate public health threat. The NJDEP estimated it would take the tritium 14 to 15 years to contaminate the nearest potable well water.

NJDEP scientists are currently creating a formal cleanup plan which will be ready in a matter of weeks. The NJDEP issued a Spill Act directive last Friday that requires Exelon Nuclear, the company that operates the Oyster Creek plant, to comply with its cleanup directions.

When the leak was discovered Exelon notified the NJDEP. It has been monitoring wells around the site and providing water samples to the NJDEP for independent analysis.

Joe Grimes, Exelon’s senior vice president for Mid-Atlantic Operations said on the company website that in the past year there were no detectable levels of tritium leaving the site.

The company is also moving pipes containing contaminated water above ground or into monitoring trenches. The project will be finished by the end of 2010 and cost the company $13 million.

“Tritium is one of the least dangerous radionuclides [radioactive atoms],” according to the EPA. Tritium occurs naturally in low concentrations; exposure to high levels through ingestion or skin absorption are linked with an increased risk of cancer.

Tritium is used in commercial nuclear reactors to produce self-luminescent products such as exit signs, luminous paints, wristwatches and aircraft dials. It is also used in research reactors and weapons production in high concentrations, according to the EPA.