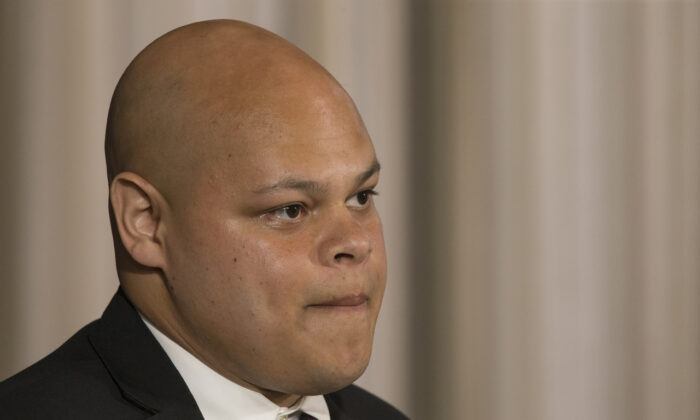 Former Bell Media radio host Jamil Jivani is taking the company to court, saying that he was fired for not subscribing to certain political or social views on racial identity and that he was not “woke” enough.

“Many of you have heard about what transpired when Bell Media fired me in January. Well, now it’s time for them to answer for their racism,” Jivani said in a statement released on his Substack on Sept. 2.

The 34-year-old Oshawa, Ontario, lawyer and author first joined Bell Media as an independent contractor in July 2020 to host a show that focused on issues surrounding the Black Lives Matter social movement, said a statement of claim filed in the Ontario Superior Court of Justice. In September that year, Jivani signed a contract to do a nightly show on Bell’s iHeartRadio, saying that he was “excited” to bring on a variety of guests from the Black community representing a diversity of views.

In January 2021, Jivani entered into a full-time employment contract with Bell Media, with the company saying the host was “poised to have a long career with the company.” He was Bell’s only full-time black radio host in the talk radio market, with his program The Jamil Jivani Show beginning airing on Feb. 3, 2021, to coincident with the Black History Month—a central focus of the show.

But Jivani said tensions between him and Bell management began to rise over the next few month as he holds conservative views and pushed back against the “woke” agenda pushed by big corporations that try to submerge opposing views from people like him.

My statement of claim against Bell Media is available in full here. Unlike Bell, I have nothing to hide. https://t.co/0wNa4EbzGa

Following his termination from Bell, Jivani published a commentary titled “Even black men can be fired for not being ‘woke’ enough,” in which he said that “Wokeness—a political agenda with a superficial commitment to diversity and inclusion—has become a global ideological movement” and that “big corporations [are] pushing this agenda and punishing those who refuse to comply.”

“Weeks after George Floyd was killed in Minneapolis in 2020, Bell Media hired me to be part of the iHeartRadio talk network as a radio host. From my perspective, Bell Media/iHeartRadio recognized that despite its publicized commitment to valuing people from different backgrounds, they had yet to ever hire a full-time black talk radio host in their Canadian market,” Jivani wrote.

“What my experience made clear is that the company failed to consider what it would mean to sincerely engage someone from a black community, without expectations that we conform to the pressures of tokenism.”

Tensions between Jivani and Bell Media sharpened as public interest in the Black Lives Matter movement waned. The movement gained traction over the police custody death of George Floyd, which sparked massive protests in the United States starting in May 2020. Thousands of arrests were made as the protests were marred by looting, violence, and arson.

“As news stories around Black Lives Matter and other racial issues faded from the news, Bell no longer had the same use for a Black employee,” Jivani said in his statement of claim.

“It became clear that Bell had a rigid but unspoken vision for how Black people should fit into the company. Bell wanted the Plaintiff to be a token beholden to the company’s identity politics.”

The Epoch Times reached out to Bell Media for comment but didn’t hear back by publication time.

“My experience shows exactly why it’s critical for politicians and business leaders to challenge the power of woke capital. What these companies are doing is not just business; it’s politics,” Jivani said in his commentary.

The dissonance between Bell and Jivani increased again when the conglomerate “pressured [Jivani] to denounce Canada as racist” ahead of Canada Day 2021, according to the statement of claim.

“On-air talent were instructed to air pre-produced segments that defined Canada by the worst parts of the country’s history,” it said, referencing the discovery that year of what was believed to be unnamed graves of indigenous children at the sites of former residential schools.

Jivani, however, “refused and questioned this bizarre request” from Bell, saying that he didn’t find it “appropriate to attack Canada in the lead up to Canada Day.”

On the air, he instead aired segments “highlighting the accomplishments of Canadians and spotlighting the voices of immigrants and military veterans”—a decision that led to increased tension with Bell management.

“Bell was disappointed by his refusal to espouse a specific set of social and political views, and the company was disappointed that he did not fit the mold of a Black stereotype that they had expected him to,” said the statement, which added that despite their tensions, the conglomerate “refused to explicitly state their expectations of [Jivani] or explain why the company had such stereotypical expectations of him as a member of the Black community.”

In December 2021, a senior manager, Hilary Whyte, wrote to Jivani saying that Bell had received “complaints and concerns” about his show, including allegations that it contained “divisive and contrarian topics.”

“I want to be sure we are reflecting the company’s strong commitment to diversity and inclusion, and that we are building passion in our audience and growing our ratings,” Whyte wrote.

“We are incredibly challenged right now in both ratings and revenue, and it’s critical that we remain aligned.”

Jivani said he was “shocked and blindsided” by the email and wrote back expressing concerns that, being the only black host in most, if not all, of Bell Media’s talk radio markets, a show branding his name “would have its commitment to diversity and inclusion questioned.”

“We embrace different viewpoints on our show each and every night that reflect Canada’s multicultural mosaic,” he wrote.

Whyte called for a conference call meeting on Jan. 4, 2022, to address the issues and advised that Jivani be removed from the air until that time. Upon attending that meeting, Whyte informed Jivani that he was terminated from his employment at Bell “as a result of changes to the organization,” and left without addressing his concerns.

“Despite the fact that Bell has asserted that diversity and inclusion are paramount in the company, it would not answer the questions asked by its Black employee and instead manufactured reasons to terminate him,” said the statement.