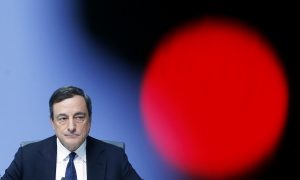 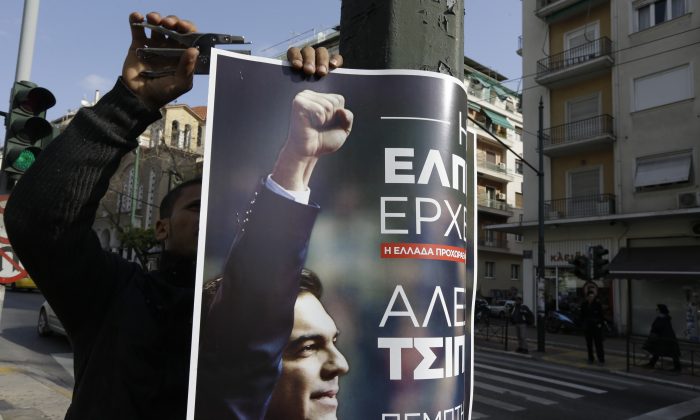 An Egyptian worker displays a poster on an electricity pole promoting Alexis Tsipras, head of Greece's Syriza left-wing main opposition party, pre-election speech in Athens on Jan. 21, 2015. His left-wing Syriza party is poised to win a general election in Greece Sunday, a landmark event for Europe’s ambitious political newcomers with domestic resonance in a country with a long history of deadly political division that has recently been ravaged by financial crisis. (AP Photo/Thanassis Stavrakis)
Europe

ATHENS, Greece—Dressed in an open-collar shirt and blue suede shoes, Alexis Tsipras arrives at his party’s headquarters for a live Q&A session on Twitter. The session is moderated by a leftwing newspaper that normally sells less than 2,000 copies a day. But Tsipras is reaching a much bigger audience: Foreign camera crews pack the tiny studio, and soon the hashtag #asktsipras is trending worldwide.

Tsipras is Greece’s unlikely man of the moment.

His radical left Syriza party is poised to win Greece’s general election on Sunday — riding a wave of anger over austerity measures imposed as a condition for an international bailout. The telegenic Tsipras has long railed the loudest against the draconian cut-backs that have ruined countless Greek families, and he’s now reaping the rewards of a promise to scrap or renegotiate the bailout.

The prospect of victory for the traditionally far-left party that vows to challenge Greece’s rescue package rattled international markets and revived fears of a “Grexit” — a departure of Greece from the euro currency that could renew trouble for the entire European project.

Yet days before the vote, market anxiety has eased and opinion polls suggest the gap between Syriza and conservative Prime Minister Antonis Samaras is widening in Syriza’s favor — giving Tsipras a shot at outright victory or several options to form a coalition government.

“What have five years of sacrifice got us? In a word: Nothing,” Tsipras wrote in an article Thursday. “All we got is despair: 1.3 million unemployed, 3 million without health insurance, and pensioners who cannot afford to buy medicine.”

Syriza is demanding that half the country’s 240 billion euro ($275 billion) bailout debt be canceled and that future repayment be linked to growth, arguing that Greece’s economy will ultimately collapse under the weight of an unsustainably high national debt that is around 175 percent of GDP.

The party’s success lies in offering a message of optimism, after six grueling years of recession. It campaigned under the slogan “Hope is on the way.” Cardboard placards carrying that message have been stapled to lampposts across Athens.

Opponents accuse Tsipras of peddling false promises that will risk bankruptcy. Yet it appears that optimism is what many voters want to hear.

“I hope that perhaps with these upcoming elections something will change for the better,” said Athens voter Andreas Psychoulis, a tile installer who has fallen behind on tax payments.

Tsipras, a 40-year-old civil engineer, has also banked on his image as a political renegade, rarely wearing a tie as he challenges the elite in a country where politicians typically come from a privileged background, and parliamentary seats often pass from father to son.

“I think people have got the message that Tsipras does not have connections with the major interests, those who until now have not been paying their taxes,” Nikos Pappas — Tsipras’ chief of staff — told The Associated Press.

Tsipras started his political career at age 28 as a candidate for mayor of Athens in 2006, winning a surprising 10.5 percent of the vote at a time when his party still struggled to make the 3 percent threshold needed to send representatives to parliament.

He was elected leader of the party two years later, presiding over its astonishing rise in popularity. He unified the structure of a party founded as a loose coalition of small left-wing groups and dissidents from the still proudly pro-Soviet Greek Communist Party.

Tsipras was once himself a member of the Communist youth, and the man tipped to be Greece’s next finance minister, economist Giannis Dragasakis, narrowly lost a Communist leadership contest in 1991.

Some experts say that a triumph for Syriza — fully named the Radical Left Coalition — could spell trouble for Social Democratic parties across Europe, with voters possibly heeding more radical solutions for their economic woes. Greece’s Socialist Pasok party, until recently the nation’s main political force, has seen its support wiped out in the financial crisis after backing successive bailout agreements and joining the Samaras government in coalition.

“I think a Syriza victory would definitely reverberate around Europe, not least because you have similar parties emerging in other countries,” said Vincenzo Scarpetta, a political analyst at the London-based think-tank Open Europe.

“Around Europe you are seeing this type of grand coalition, and the example of Greece is quite clear. You have seen how much support for Pasok has decreased,” said Scarpetta. “Part of the rhetoric used by anti-establishment parties like Syriza is that (opponents) ‘are all the same.'”

From The Associated Press. AP television producer Theodora Tongas in Athens contributed to this report.