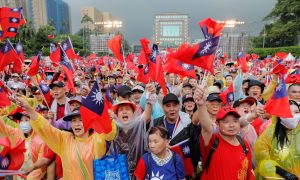 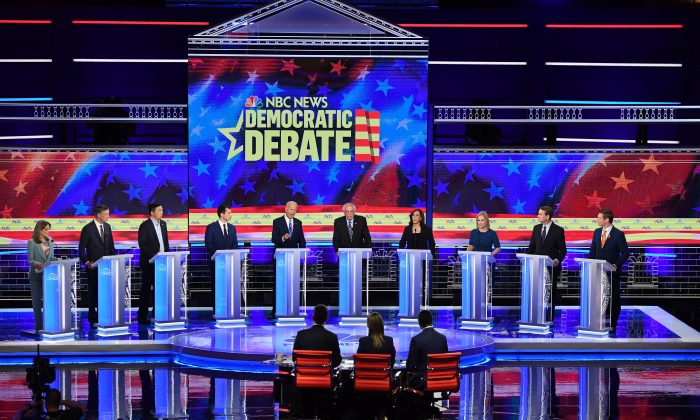 The second Democratic primary debate of the 2020 presidential campaign season at the Adrienne Arsht Center for the Performing Arts in Miami, Fla., on June 27, 2019. (SAUL LOEB / AFP)
Viewpoints

Radical Democrat Candidates Have Put Themselves in Impossible Position

What a stunning spectacle it was. During the two nights of Democratic debates on June 26 and 27, the U.S. public got an up-close look at a political party that has become increasingly radical and incoherent.

If this slate of 20 candidates is the best the Democrats can come up with, then it has even more problems than I thought it did.

Here’s a brief rundown of the litany of topics where these 20 candidates stand on issues:

No. 5 in that list above is the one that absolutely blew me away. NBC News’ Savannah Guthrie alerted the 10 candidates on the stage that this would be “a show-of-hands question”:

“A lot of you have been talking tonight about these government health care plans that you proposed in one form or another. This is a show-of-hands question, and hold them up for a moment, so people can see.”

After having ensured that the candidates understood what was coming, Guthrie asked this important question:

“Raise your hand if your government plan would provide coverage for undocumented immigrants.”

In response to the question, every candidate on the stage raised a hand.

I’m still in disbelief. Somehow, the Democratic Party’s best and brightest on that debate stage managed to take both the stripping of private health care plans (Obamacare 2.0) and raising taxes so U.S. citizens can foot the health care bill for illegals, and combined them!

It’s like they held a brainstorming session where they said, “What two things could we bring together that would make most U.S. taxpayers so angry that they’ll get out the pitchforks and torches and come after us?”

Then-President Barack Obama only got into position to pull that neat Obamacare trick on millions of Americans because he and his surrogates spent years carefully deceiving the country about what was going to happen once the Affordable Care Act was implemented.

Now? The Democrats currently running for president are not even bothering to lie. “Sure, we’re totally planning to take your private plans away.” But amazingly, they’re going even further than that. “We’re gonna take your plans away, give free health care to illegal immigrants, and we’re gonna make you pay for it!”

President Donald Trump wasted no time calling attention to the fact that not only does this slate of candidates fully intend to take away the private health insurance of millions of Americans by forcing them into a state-run system, they also managed to boast about forcing U.S. taxpayers to pick up the health insurance tab for millions of illegal immigrants. Within minutes of having watched that transpire, Trump took to Twitter:

“All Democrats just raised their hands for giving millions of illegal aliens unlimited healthcare. How about taking care of American Citizens first!? That’s the end of that race!”

If you’d told me in 2017 that, by 2019, the Democratic party would be running candidates for president who not only intended to rip Americans’ private health insurance out of their hands—and not even bothering to lie about it this time—but would also force those same Americans to pay higher taxes to finance the health insurance of illegals, I wouldn’t have believed you.

But I saw it with my own eyes. It happened. It’s on video.

This major political party is now being run by lunatics. Not only is what I outlined above not a winning platform, pushing this kind of extreme agenda is going to lead to electoral extinction for the Democratic Party.

All These Candidates Have Gone Too Far Left

The conventional wisdom is that candidates vying for a party’s nomination during the primary season make direct appeals to the base. Then, during the general election phase, the nominee works to hold the base that nominated them, while simultaneously trying to attract independents and crossover votes from the other party. They accomplish this by shifting to the center.

The biggest danger for the nominee is that in shifting to the center, they not only fail to pick up enough independent or crossover votes, they also end up alienating large segments of the base, which backed them during the primaries because they expected the nominee to run in the general as either a staunch conservative or a hardcore liberal.

Not a single state has held a Democratic primary yet and already these candidates have moved so far left, they risk falling off the planet. The one who manages to secure the nomination is going to face the daunting task of holding the radical base that nominated them, while courting voters in the middle. Move too far from the base, and the nominee risks losing.

But it seems clear to me that to win this race against a strong incumbent president such as Trump, who is enjoying the benefits of a strong economy and rising poll numbers, the Democratic nominee is going to be compelled to move to the center. In a conventional race, the Democratic nominee wouldn’t have to make a large jump to the center to compete with the GOP nominee for those crucial votes.

But it’s becoming quite clear already that this isn’t going to be a conventional race. From where this Democratic slate of candidates is starting—with each trying to out-liberal the next—the person who wins the nomination is going to face an impossible jump to get anywhere near the middle of the political spectrum for the general election. And by even attempting that, how much of the Democratic far-left base would feel betrayed by that and abandon the nominee over it?

Trump won the 2016 election by convincing enough blue-collar, working-class voters—who traditionally vote Democrat—to cross over and vote for him. He’s currently positioning himself to do it again. In the meantime, the Democrats are positioning themselves for a massive landslide defeat.