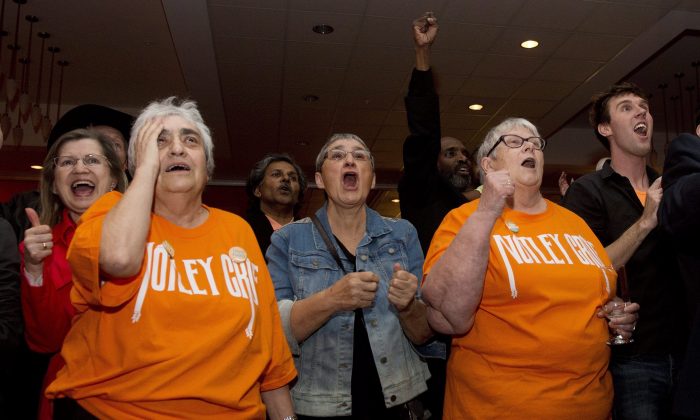 NDP supporters react with delight as they watch the election results at NDP leader Rachel Notley’s headquarters in Edmonton on May 5, 2015. (The Canadian Press/Nathan Denette)
Canada

Rachel Notley: NDP Government Will Be a Partner in Building the Province

With the once unthinkable now real—an NDP government in Alberta—businesses and oil magnates are bracing for change and the shattered Progressive Conservative (PC) machine is left to look within about where it all went wrong.

The oilpatch and Bay Street reacted swiftly on Wednesday, the day after the election: energy stocks were down about 2.75 percent and major oilsands producer Cenovus Energy Inc. was down six percent. Suncor Energy Inc. and Canadian Natural Resources Ltd. were down about 3 percent.

Those jitters could either ease or worsen. Many are awaiting more details before they pass judgment.

My job is to represent all Albertans, and job creation is a good part of that.
— Rachel Notley

“I’m pretty shocked, quite shocked,” he said. “There’s been quite a bit of chatter this morning about capital already looking at a way to invest outside of Alberta just across borders into B.C. and Saskatchewan.”

The NDP has said it would raise corporate taxes to 12 percent from 10 percent and examine whether Albertans are getting their fair share of royalties.

There was an uproar from industry in 2007 when former premier Ed Stelmach raised royalties. The changes were quickly reversed. At the time, the global economic downturn was just taking hold and producers said higher royalties compounded their woes.

But incoming NDP premier Rachel Notley said Wednesday her government would “work collaboratively” with industry leaders and that decisions wouldn’t be made without their input.

Jeff Gaulin, vice-president of communications at the Canadian Association of Petroleum Producers, said the group is “very confident that we will be able to work with the new Alberta government.”

While Notley has said she won’t be as involved as previous PC premiers in stumping for pipelines like the proposed Keystone XL and Northern Gateway, the CEO of Enbridge Inc., the company aiming to bring the Northern Gateway pipeline to the West Coast, said he’s not worried.

“Energy is such a critical issue to Alberta. I’m really not that concerned that it’s not going to get the right attention or the right support from the new government,” Al Monaco said.

‘Things are going to be just A-OK’

Notley said she will work with oil and gas and other business leaders to assure them her government will be a partner in building the province.

“I’m going to be making phone calls today to leaders within the energy industry to begin those conversations,” she told reporters at the legislature on May 6.

“They can count on us to work collaboratively with them. I’m hopeful that over the course of the next two weeks they will come to realize that things are going to be just A-OK over here in Alberta.”

Notley also pledged there would be no special treatment for unions. She said her government shares common cause on many issues with union leaders, just as it does with business leaders.

“My job is to represent all Albertans, and job creation is a good part of that,” she said.

The NDP had just four legislature members and the PC had 70 when former premier Jim Prentice dropped the writ last month. Wildrose had just five after defections to the PC gutted the party.

Now the NDP has 53, Wildrose has 21, the PC 10, and the Liberals linger with 1—down from 5 going into the election. The centrist Alberta Party finally lands in the legislature with 1.

Prentice announced that he was going to quit public life before the final polls in his Calgary-Foothills riding were counted. He won, so there’s now a need for a byelection.

This isn’t a massive shift to the left.
— Lori Williams, Mount Royal University

In the closing days of the campaign Prentice tried to sow fear amongst voters over what he termed a job-killing, anti-business NDP platform.

Prentice was criticized harshly in the lead-up to the campaign for suggesting Albertans needed to look in the mirror when placing blame for province’s financial woes, sidestepping the responsibility his own party had in the state of affairs.

Williams said Prentice made several missteps, including calling the election a year earlier than required by law.

But she suggested the real reason for the loss was Notley, whom Williams sees as having the ability to connect with voters the same way former premier Ralph Klein did.

Notley was able to sell her message that the election was not about ideology, but about a vote for grassroots democracy and populism.

“This isn’t a massive shift to the left,” Williams said. “The NDP in Alberta is a very centrist party, very moderate, very pro-business.”

The NDP also benefited from vote-splitting on the right, with Wildrose and PC dividing conservative voters.

That reality has spurred renewed talk of uniting the right among senior Conservatives in the province.