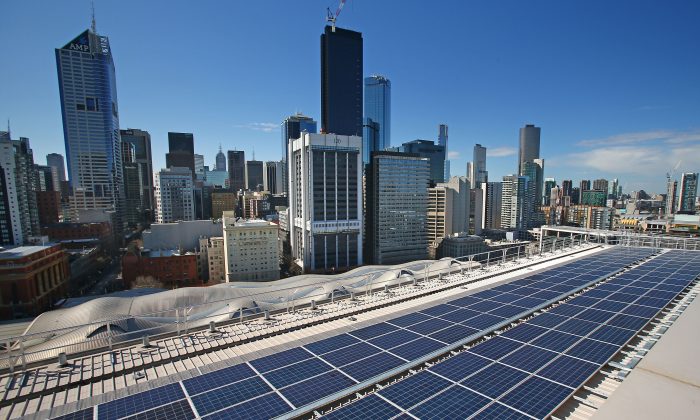 An analyst has warned that the push for net zero with existing renewables technologies by 2050 will break the energy market and lead to a stark increase in Australia’s energy price within a decade.

It comes as Australia, and the world, continues to struggle with an energy crisis amid supply issues plaguing much of the country’s east coast in June, causing the national operator to suspend the electricity market for more than a week.

Institute of Public Affairs research fellow Kevin You on July 17 said the recent incidents of market failures “are not accidents” but are “all designed features of net zero by 2050,” which he said is “casting a dark cloud” over the fossil fuel industry.

He noted that investors are “intimidated” by “the iron fist of the government,” which is likely to place regulatory burdens on coal fired power generators, gas, and oil projects, and on downstream electricity businesses that deal with traditional energy generators.

“You know what happens when the government sticks its nose where it doesn’t belong—whether it be in the transport industry, the aviation industry, in energy generation, in energy distribution—it breaks the market,” he told the audience at Australia’s largest annual liberty conference, the Friedman conference.

You described the net zero target as an attempt by “big government, controlled by an elite circle of faceless men, the renewables lobby, and rent seekers” to “take over and take down the energy market.”

The annual Friedman conference saw over a hundred people gathering at the University of Technology Sydney’s Function Centre to discuss a wide range of topics from politics, energy to economics from a pro-liberty standpoint. This year it features prominent speakers including former Liberal senator Amanda Stoker, Victorian MP David Limbrick and One Nation Senator Malcolm Roberts. It is hosted by the Australian Libertarian Society and the Australian Taxpayers’ Alliance, which is run by President Brian Marlow.

In the pursuit of net zero, the government is directing investment into so-called renewables, offering the sector annual subsidies of up to $8 billion (US$5.5 billion) a year until 2030.

Meanwhile, the Labor government, elected in May, has committed to cutting greenhouse gas emissions by 43 percent by 2030, and investing in renewables while promising “cheaper electricity prices for homes and businesses.”

“There is a race for renewable energy jobs and investment around the world, and Australia should be leading that race,” Energy Minister Chris Bowen said.

However, a similar pledge was made in the 2007 election, when the then-Rudd government promised that renewables would generate at least 20 percent of Australia’s electricity supply by 2020.

The promise remained unfulfilled, with renewables making up 7 percent of Australian energy consumption in 2019-20, according to the Department of Climate Change, Energy, the Environment and Water.

But despite its popular appeal, renewable energy is “unreliable,” You said, arguing that “if it can sustain itself in the free market, then it wouldn’t need taxpayer money to line up the pockets of big renewable industries.”

“If renewables can compete in the energy market, then let them compete in a free and fair market against called against gas against nuclear power.”

The analyst, whose research focuses on the political economy and industrial relations, predicted that for every gigawatt removed from the grid, wholesale energy prices will jump by $22 (US$15.25) per megawatt hour. This means that the average quarterly market price per megawatt hour will jump from A$89 to A$111.

You also estimated that in the next eight years, 11 gigawatts of capacity offered by coal fired power generators will be taken offline. This, he said, will translate to a quadrupling in wholesale electricity prices, with the flow on effect being a doubling in retail electricity prices.

“So far, the literal doubling of electricity prices is only felt by several thousand households who are customers of small electricity retailers.

“But it will only get worse from here,” You warned.

Frank Calabria, managing director of Origin Energy, which operates Australia’s largest coal-fired power station, estimated that reaching net zero by 2050 would require $120 trillion (US$86.25 trillion) to be invested in the energy sector between now and 2050.

If this cost is split among the population of the developed world (1.3 billion people), the cost would be equivalent to A$369,000 for a household of four—that’s an annual cost of $13,200 per household for the next 28 years.

“Balancing tighter supply and demand in the market is an increasingly complex challenge, with the back-up, or firming, of variable renewable supply met by a combination of technology,” he told the Australian Energy conference on June 7.

IPA research fellow You also noted that Australia’s emissions are nowhere near that of China.

“Australia emits just over 1 percent of the world’s greenhouse gases,” he said.