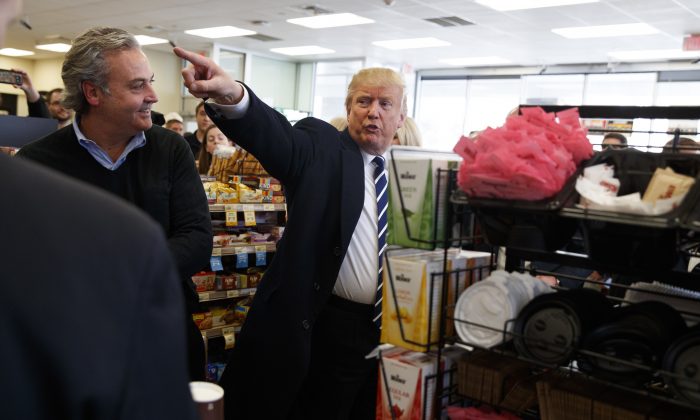 KING OF PRUSSIA, Pa.—Momentum flagging, Hillary Clinton reminded swing state voters Tuesday what they may dislike about Donald Trump. Her GOP rival homed in on the FBI’s renewed examination of her emails and the rising premiums for “Obamacare,” capitalizing on late-breaking political ammunition.

Campaigning in Pennsylvania, a state where some health care premiums are expected to go up by more than 40 percent, Trump made a joint appearance with running mate Mike Pence to present their health care proposal.

If elected, he promised to immediately convene a special session of Congress to repeal the law. It’s unclear what that meant, since Congress is already scheduled to be in session several weeks before the new president is inaugurated.

While the fresh opportunities reinforce years of Republican attacks, they may be too little and too late to help Trump: As Clinton’s national lead shrinks in the final week of the race, she is relying on a firewall of support from women and minority voters in demographically diverse swing states.

In rallies across Florida on Tuesday, she plans to hit hard at the treatment of women by Trump, who has been accused of repeatedly sexually harassing and even assaulting them. She will be introduced by Alicia Machado, the winner of Trump’s 1996 Miss Universe crown whom he has repeatedly insulted for her weight gain.

With more than 23 million ballots already cast through early voting, Trump simply may not have the time or organizational capacity to improve his standing enough over the next week to win the White House. The Republican nominee still faces a narrow pathway to winning the 270 electoral votes—one that includes defending states like Arizona and Utah that Republicans have won for decades.

Even as the White House remains an uphill climb, the new developments had potential to help embattled Republicans as they struggle to defend their Senate majority.

New Poll Finds Trump up by 1 Point Over Clinton

House Speaker Paul Ryan, who told Fox News he voted for Trump last week, warned that electing Clinton and a Democratic-controlled Congress would be “the worst of all possible things.”

“For those of us who lived through the 1990s, it’s sort of a feeling like deja vu,” he said. “This is what life with the Clintons looks like. It’s always a scandal, then there’s an investigation.”

Both sides agree the news puts Democratic down-ticket candidates on the defensive, at least briefly. It comes after weeks where Democrats have rarely had to answer for their party’s nominee, while Republicans have been doing so practically constantly.

But neither Republicans nor Democrats view the news as a game-changer in the race for Senate control. Democrats remain optimistic they will pick up the four or five seats needed to retake control, while Republicans concede they are in a real race to keep the majority.

Clinton’s campaign has spent nearly two years developing an extensive organizing apparatus, building off the political machine that twice boosted President Barack Obama to victory. Her team has pounded the airwaves with advertising, assembled an expansive voter data file and constructed a nationwide political organization that dwarfs her opponent’s.

On Tuesday, it released a new ad featuring video footage of Trump making sexist and degrading statements about women. “Anyone who does what he does is unfit to be president,” reads text on the final shot of the spot, which her campaign says will run in eight battleground states.

Clinton’s campaign is focused on pushing voters to the polls for early voting in critical states such as Florida, Nevada and Colorado, where one-third of the expected ballots have already been cast. The Democratic presidential nominee and her allies in a dozen battleground states have more than 4,800 people knocking on doors, making phone calls and otherwise working to support her candidacy.

With Clinton on Defense, Trump Campaigns in Blue States

The New York businessman over the past year has instead depended on massive rallies and free media coverage to drive his outsider candidacy. This week, he’s devoting his most valuable resource—his time—to states where polls suggest he’s trailing Clinton by significant margins.

Trump had two rallies Monday in Michigan, a state that last went for a Republican presidential nominee in 1988. On Tuesday, he’s scheduled to appear with running mate Mike Pence in Wisconsin, which hasn’t backed a Republican for president since Ronald Reagan’s re-election in 1984. His campaign also expanded their ad buy into several longshot states, including Michigan, New Mexico and Wisconsin.

In Pennsylvania, a state where Trump’s team now sees new opportunities, he let Pence do most of the heavy lifting. The Indiana governor has delivered the bulk of his party’s policy and political case against the health care law.

“We can’t trust Hillary Clinton with our health care any more than we can trust her with classified information,” he said. “Obamacare was a catastrophic failure. Hillary Clinton says she wants to double down on that failure.”

Pence himself has been both for and against the Affordable Care Act at different times. He railed against it while in Congress, but one of his chief accomplishments as governor was Indiana’s expansion of Medicaid under President Barack Obama’s health care law—a plan Pence called The Healthy Indiana Plan 2.0.