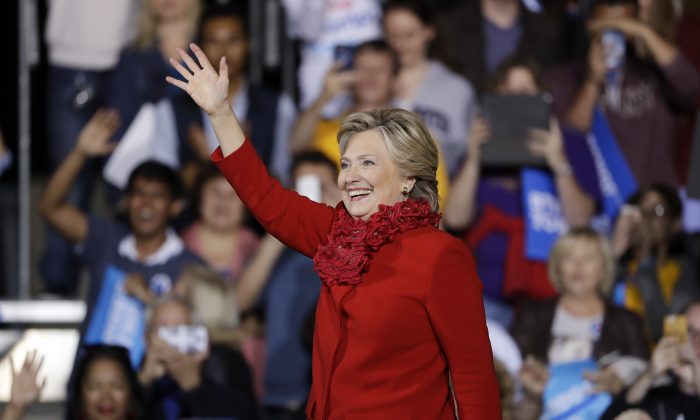 Democratic presidential candidate Hillary Clinton campaigns at the base of the John A. Roebling Suspension Bridge in Cincinnati, on Oct. 31, 2016. (AP Photo/Matt Rourke)
Politics

WASHINGTON—Hillary Clinton is pushing her supporters to cast early ballots in key battleground states, as Donald Trump tries to make up ground with intensified attacks following the FBI’s renewed examination of her email practices.

As her national lead shrinks in the final week of the race, Clinton is relying on a firewall of support in more demographically diverse swing states.

Beyond the White House, Republicans see the email exchanges as a new opportunity to win over voters for dozens of down-ballot races that will determine House and Senate control next year.

House Speaker Paul Ryan told Fox News he voted for Trump last week and warned that electing Clinton and a Democratic-controlled Congress would be “the worst of all possible things.”

“For those of us who lived through the 1990s, it’s sort of a feeling like deja vu,” he said. “This is what life with the Clinton’s looks like. It’s always a scandal then there’s an investigation.”

With more than 23 million ballots already cast through early voting, it’s unclear whether Trump has the time or organizational capacity to improve his standing enough over the next week to win the White House.

While Clinton’s newest email controversy may help Trump pick up support in older, whiter states like Ohio and Iowa, the Republican nominee still faces a narrow pathway to winning the 270 electoral votes—one that includes defending states like Arizona and Utah that Republicans have won for decades.

Both campaigns argued Tuesday they were on the path to victory.

“We’re running like we’re 20 points behind,” said Clinton campaign manager Robby Mook. “We are going to win this election, but it’s important that every one of our supporters turns out.”

With just a week left to go before Election Day, the race for the White House remains a test of a simple question: Will the conventional rules of modern-day campaigns apply to a 2016 election that has been anything but conventional?

Clinton’s campaign has spent nearly two years developing an extensive organizing apparatus, building off the political machine that twice boosted President Barack Obama to victory. Her team has pounded the airwaves with advertising, assembled an expansive voter data file and constructed a nationwide political organization that dwarfs her opponent’s.

Her team is focused on pushing voters to the polls for early voting in critical states such as Florida, Nevada and Colorado, where one-third of the expected ballots have already been cast. On Tuesday, she plans to pound Trump at rallies across Florida.

The Democratic presidential nominee and her allies in a dozen battleground states have more than 4,800 people knocking on doors, making phone calls and otherwise working to support her candidacy. Clinton’s numbers, as reported in recent campaign filings, tripled those of Trump and the national and state Republican parties.

The New York businessman over the past year has largely ignored the key components of recent winning campaigns, depending instead on massive rallies and free media coverage to drive his outsider candidacy. This week, he’s devoting his most valuable resource—his time—to states where polls suggest he’s trailing Clinton by significant margins.

Trump had two rallies Monday in Michigan, a state that last went for a Republican presidential nominee in 1988. On Tuesday, he’s scheduled to appear with running mate Mike Pence in Wisconsin, which hasn’t backed a Republican for president since Ronald Reagan’s re-election in 1984.

“Her election would mire our government and our country in a constitutional crisis that we cannot afford,” he declared Monday in Grand Rapids, Michigan, pointing to the FBI’s examination as evidence the former secretary of state might face a criminal trial as president.

Clinton, defending herself from the new FBI examination, focused Monday on battleground Ohio, a state Trump’s team concedes he must win and where he shows signs of a possible victory.

“There is no case here,” Clinton insisted. “Most people have decided a long time ago what they think about all this.”

Mook, her campaign manager, has decried what he called a “blatant double standard” following a CNBC report that FBI Director James Comey opposed releasing details about possible Russian interference in the U.S. election because it was too close to Election Day. Comey issued a letter to congressional leaders on Friday about the FBI’s new effort into Clinton’s correspondence.

The AP has not confirmed the CNBC report. The FBI declined comment Monday.

As for Trump’s charge that a Clinton election might prompt “a constitutional crisis,” the Justice Department’s office of legal counsel said in 1973 that criminally prosecuting a president would unconstitutionally undermine the executive branch. A 2000 memo reached a similar conclusion. Presidents can face civil lawsuits.