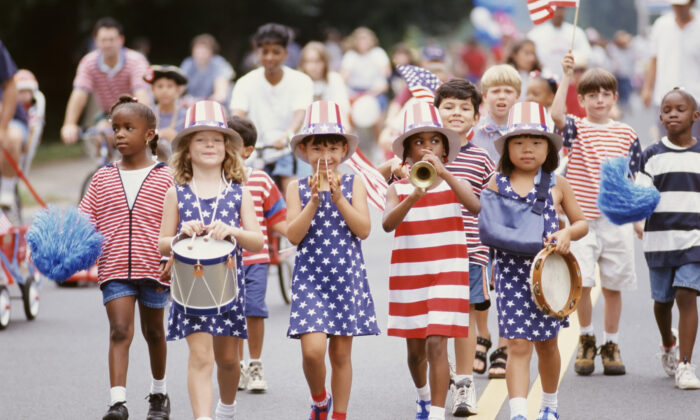 Parents should raise children to be virtuous and to better others' lives, according to John De Gree, founder of The Classical Historian. "The ideals and energy of children can change society quickly," he said. (Ariel Skelley/Getty Images)
Viewpoints

Race Matching and Other Crazy Theories Destroying Our Schools

Florida Gov. Ron DeSantis nails it when he demands that teachers “educate children, not indoctrinate.”

As schools reopen, a war is raging to control the minds of students.

On one side, the nation’s largest teachers unions are pushing race consciousness, demonization of American history, and graphic sex education, even in elementary school.

On the other side, irate parents are battling the indoctrinators. They’re insisting that teachers stick to math, science, reading skills, and what everyone can agree are the facts about history.

Teachers and left-wing allies are demanding that kids have safe spaces reserved for each minority group or gender. All kids deserve respect and safety from bullying. But what’s missing right now is safety from propaganda. Schools should be made into safe spaces for learning, shielded from political brainwashing.

As the school year begins, teachers should be told to scrub their classrooms of Black Lives Matter logos, rainbow flags, “Believe Women” signs, and other slogans. Reserve the blackboards for ABCs, multiplication tables, and historical timelines.

The Carroll County Board of Education in Maryland voted in June to ban political slogans and symbols in the classrooms, other than the Stars and Stripes and state and county flags.

“Our students are a captive audience,” explained one board member, “and as such need to be protected from all political agendas, both from the right and the left.”

Last week, the Kettle Moraine School Board in Wisconsin did the same. It should be the approach everywhere.

The tougher challenge is scrubbing the curriculum, which is largely determined by the teachers unions, with input from leftist groups such as the Southern Poverty Law Center; the Gay, Lesbian, and Straight Education Network; and the American Civil Liberties Union (ACLU).

State legislatures in Florida, Virginia, Georgia, Kentucky, Mississippi, and Oklahoma passed 12 bills in 2021 and another seven so far this year to limit what teachers introduce in the classroom. More than 100 more bills are in the works around the country. Most resemble Florida’s new Stop WOKE Act. They bar discussions of sexuality and gender in grades K–3 and limit sex education topics in the later grades to what parents approve. The bills also bar critical race theory themes, including labeling white people as oppressors and black people as victims.

Leftist groups such as the ACLU and Pen America decry these laws as “gag orders” that threaten to destroy “open inquiry.” Nonsense. These new laws don’t gag anyone from discussing sex, gender, or race in public. They protect children from being force-fed racially divisive and sexualized materials.

A third-grade reading circle isn’t a public square. The children have no choice but to be there and are too young to pick and choose what they believe.

Children who have been told there’s a Santa Claus and believe it are also likely to believe a teacher who tells them that they can be pansexual or nonbinary or that a child with a boy’s body parts can be a girl.

Parents want control over what their children are taught, especially about sensitive topics. But even if you’re not a parent, the stakes are high. Society can’t prosper when young people enter the workforce lacking skills, filled with animus toward their country, and unprepared to function at work and in civic life.

The two biggest teachers unions—the National Education Association and the American Federation of Teachers—are pushing racial division. A new Minneapolis union contract specifies that when layoffs are needed, white teachers will get axed before nonwhite teachers with the same seniority to increase the chances that nonwhite students have a nonwhite teacher. Citing left-wing pedagogy that encourages “race matching,” defenders of the contract claim that black students learn better with black teachers.

The contract violates the rights of white teachers, but it’s also unjust to students of color. Race matching doesn’t prepare them for the real world any more than labeling them victims does. What employer can deal with new hires who need “safe spaces” and a boss whose race matches their own? Students raised to expect these things will be doomed, and our nation will be, too.