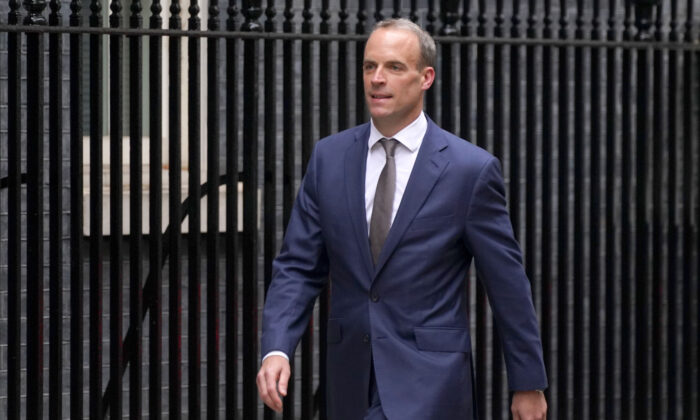 In a cabinet reshuffle that started on Wednesday, Raab was the only minister who was replaced from the government’s four Great Offices of State.

Asked about the change on Thursday, Prime Minister Boris Johnson’s official spokesman said Raab’s new job in the Ministry of Justice (MOJ) is “a vital position for him.”

“It is true that dealing with criminal justice is one of the key functions of government and that’s why the prime minister has sought to move Dominic Raab into this position, given his background and expertise in this area,” he told reporters.

It has been speculated that the former foreign secretary was demoted for taking a holiday in the Greek island of Crete while the Taliban was advancing in Afghanistan, and not returning to the UK immediately after the Afghan capital of Kabul fell into Taliban control.

But his colleague, Defence Secretary Ben Wallace, dismissed the theory earlier on Thursday.

“Dominic is by trade a lawyer, he started his life in the Foreign Office as a human rights lawyer and he’s gone to the Ministry of Justice which is actually a very, very important role and a role he desperately understands,” the defence secretary said.

Raab picked up the title of deputy prime minister—a position that has been vacant since 2015—while being transferred to the MOJ.

He has previously served as the first secretary of state and stood in for Johnson while the prime minister was hospitalised with COVID-19.

Johnson’s spokesman said the new title formalises Raab’s position as the prime minister’s deputy, allowing him to stand in for Johnson at Prime Minister’s Questions in Parliament.

“It demonstrates his seniority within government and the trust the prime minister places with him,” he said.

Asked what the difference was between being first secretary and deputy prime minister, the spokesman added, “You can expect him to be involved in cross-governmental work when that is necessitated.”

The spokesperson said he wasn’t going to “be prescriptive while we are still in the midst of this process,” but “it is clear” Raab will “play an important senior role in government.”

Pressed on whether Raab had specifically requested the title change during the reshuffle, the spokesman told reporters, “Look, I’m not going to get into individual conversations that take place.”

He said it is right that individual conversations remain private, and that he’s “happy to confirm this was a planned move.”

He also confirmed that the first secretary of state position has now been abolished.

Former Lord Chancellor and Secretary of State for Justice Robert Buckland was sacked during Wednesday’s reshuffle of senior cabinet roles. Asked if Johnson agreed with Buckland’s comment in his resignation letter that the justice system had suffered from underfunding, the Downing Street spokesman denied the claim.

“No, the government has invested significant resources to tackle court backlogs from the pandemic, put more criminals behind bars, and provide better support for victims,” he said.

“It has seen an extra quarter-of-a-billion in the last financial year for speedier justice, in addition to the £1 billion [$1.4 billion] court reform programme, £85 million [$117 million] for the CPS [Crown Prosecution Service] to manage caseloads, for example.”