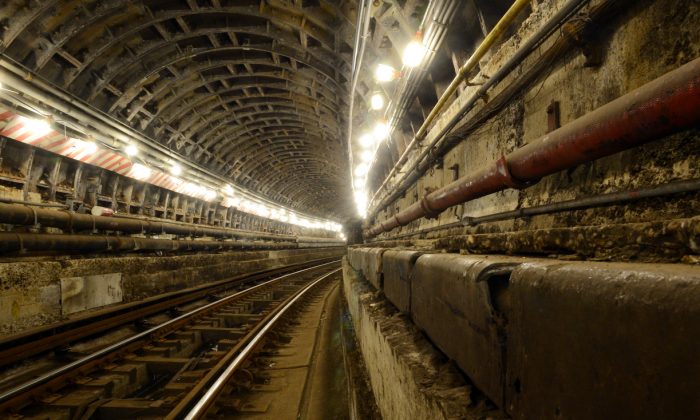 The Montague Tube, a nearly mile-long pair of tunnels that carry the R train under the East River between Brooklyn and Manhattan, will be undergoing extensive post-Sandy reparation for 14 months, leading to the closure of the R train. (Courtesy of MTA).
New York

R Train to Close for 14 Months

G Line will close for 12 weekends
By Amelia Pang

NEW YORK—It seemed that many of the subway lines restarted shortly after Hurricane Sandy hit New York; unfortunately, it was because the repairs had been temporary. The R and G lines will be undergoing intensive repair for the next year which will require the lines to close, the Metropolitan Transportation Authority (MTA) announced today.

The Montague Tube, a nearly mile-long pair of tunnels that carry the R train under the East River between Brooklyn and Manhattan, will be closed for up to 14 months. The closure will begin during the first week of August.

The Greenpoint Tube, which carries the G train under Newtown Creek between Brooklyn and Queens, will be closed for twelve, 53-hour long weekends this summer and fall starting July 6.

Customers who need the R train will have free transfers to any of the adjacent subway lines to travel between Brooklyn and Manhattan.

“Closing these two subway tubes is a difficult but necessary step to restore them to the condition they were in before Sandy struck,” MTA Acting Chairman Fernando Ferrer said in a statement.

“The temporary repairs that returned these tubes to operation after Sandy are not enough to provide reliable service,” he added.

MTA stated that signal failures were a reoccurring issue during post sandy service for the R and G lines.

The tubes had been inundated with millions of gallons of seawater that corroded and degraded the tracks, switches, signals, controls, and communication cables.
The tubes underwent temporary fixes, but permanent fixes need to begin now as delayed trains are increasing due to the reoccurring failure of such components.

The Montague Tube is in a much worse condition than the Greenpoint Tube. The Montague Tube was filled with 27 million gallons of corrosive salt water, which filled 4,025 feet tube to a depth of 20 feet and remained there for 10 days.

On weekdays, the R train will run in two sections during this time, from Forest Hills-71st Street in Queens to Whitehall Street in Manhattan, and from Court Street to Bay Ridge-95th Street in Brooklyn.

The estimated 65,000 daily riders affected will be accommodated by trains running between Brooklyn and Manhattan on the 2, 3, 4, 5, A,B,C,D,F,N, and Q lines, all of which are accessible from the R train’s final four stations in Brooklyn.

On weekends, the R train will be re-routed over the Manhattan Bridge serving all stations with the exception of Court Street and Jay-Street-MetroTech in Brooklyn and the City Hall, Cortlandt, Rector, and Whitehall Street stations in Lower Manhattan.

Overnights, the N line, which is normally re-routed through the tunnel to replace the R Line, will instead continue to operate over the Manhattan Bridge at all times.

In the Montague Tube, the necessary work is so extensive that performing repairs only on nights and weekends would extend into 2016 to complete, delaying its return to reliable service and the ability to perform work on adjacent subway lines which also require rehabilitation from Sandy damage.

For G Line riders, a special shuttle will be provided during the closures.

There will be another 24/7 Greenpoint Tube closure in summer 2014 that will last five weeks.

G Line trains will still operate to and from Church Ave. and Nassau Ave.  A shuttle bus linking the closed stops will be provided.

In the Greenpoint Tube, power cables that were immersed in salt water are corroding from the inside. The corrosion on the outside of rails increases the danger of short circuits, according to MTA.

“We recognize that these closures will be an inconvenience for many of our customers, and we will do our best to provide them with alternatives,” he said. “But there is no alternative to doing this work now,” Ferrer said.