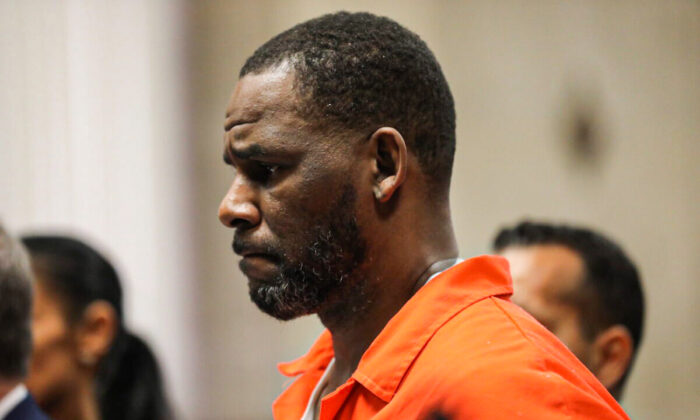 Singer R. Kelly appears during a hearing at the Leighton Criminal Courthouse in Chicago, Ill., on Sept. 17, 2019. (Antonio Perez/Pool via Getty Images)
US News

Assistant U.S. Attorney Melanie Speight confirmed in a letter to a federal court that the convicted sex trafficker, whose full name is Robert Sylvester Kelly, had been reassessed, Fox News reported.

“As a result, Plaintiff’s emergency motion for a temporary restraining order and preliminary injunction is now moot.”

Kelly’s lawyer Jennifer Bonjean, on July 1 filed a complaint alleging that MDC Brooklyn had unlawfully placed Kelly on suicide watch as a form of punishment.

In the filing, Bonjean wrote that Kelly “impressed upon me repeatedly” that he was not suicidal and that conditions at the prison were “extraordinarily stressful and harmful.”

“He expressed on multiple occasions that he did not want to be put on suicide watch and that he was not suicidal and had no thoughts of harming himself or anyone else,” the lawyer wrote.

Court documents filed by Bonjean claimed Kelly was being “confined illegally” in violation of his Eighth Amendment rights for punitive reasons “for no reason other than his status as a high-profile inmate.”

On Monday, the Bureau of Prisons announced Kelly had been removed from suicide watch, Fox News reported. He will soon be transported to Illinois to stand trial for federal sex crimes.

On June 29, Kelly was sentenced by U.S. District Judge Ann M. Donnelly to 30 years in prison. Kelly was convicted by a federal jury in Brooklyn on Sept. 27, 2021, after six weeks of trial, of nine counts of charges that included racketeering predicated on criminal conduct including sexual exploitation of children.

The charges included forced labor and Mann Act violations involving the coercion and transportation of women and girls in interstate commerce to engage in illegal sexual activity.