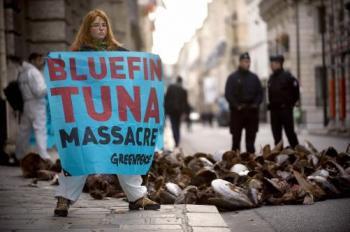 A Greenpeace activist holds a banner near tuna that the group dumped in front of French Ministry of Agriculture in Paris in November. The group called for a ban on tuna fishing and the protection of the species. (Martin Bureau/AFP/Getty Images)
Science

By Chris Wirth
Print
In what many are calling a disappointing decision, the international body responsible for managing the Atlantic and Mediterranean Bluefin Tuna fishery set the total allowable catch much higher than critics believe the already precarious fishery can bear.

The International Commission for the Conservation of Atlantic Tunas (ICCAT) recently set the total allowable catch at 22,000 tons for 2009. This was despite ICCAT’s own scientists advising a total allowable catch ranging from 8,500 to 15,000 and a closure of the fishery for the months of May, June and July.

Both Greenpeace and the World Wildlife Federation protested the decision, calling it disastrous for the survival of bluefin tuna, which is thought to be on the brink of extinction. Both claim the European Union used the threat of trade retaliations to discourage smaller and developing countries from supporting conservationist measures.

WWF was pushing for a moratorium on the fishery entirely, but especially during the key spawning months as recommended by ICCAT experts. Gemma Parkes, WWF Mediterranean Communications Officer, says her organization is “extremely disappointed” with ICCAT's decision.

“Despite growing numbers of those involved in the fishery saying that a moratorium would be the best option, ICCAT contracting parties, driven by the EU contingent, failed yet again to heed scientific advice and agreed to only a small cut in the total allowable catch, and have left the fishery open during most of the fragile spawning months when scientists said it should be closed.”

WWF says it will pursue other means to save the fishery, including consumer boycotts and attempting to get Bluefin tuna listed under CITES, the Convention on International Trade in Endangered Species of Wild Fauna and Flora. If successful, it is hoped the listing will spur strict trade controls which will indirectly shut down the fishery.

“WWF will now actively promote trade measures to curb demand. There is already a strong boycott momentum among restaurants, chefs, retailers, supermarkets and consumers around the world, and WWF will urge more and more to join that momentum,” says Parkes.

Canada, which had been part of a multi-national consortium pushing for a reduction of the total allowable catch, was also disappointed but expressed support for some of the other parts of the plan proposed by ICCAT.

“We still feel that the quota levels are set too high and outside of the scientific recommendation, and we’re disappointed that the measures adopted didn’t include a lower total allowable catch,” says Jim Jones, the Canadian Department of Fisheries and Oceans representative at ICCAT.

“Having said that, there are many positive things in the plan that are good, such as enhanced monitoring and reporting requirements and a whole new set of measures to make sure people comply with the rules.”

Canada would have liked to see the fishery closed during the late spring and early summer, which would have automatically resulted in a total allowable catch of around 15,000 tons. In the absence of that, Jones says Canada supports more action by WWF to ensure the survival of the fishery.

“Where we go from here obviously we’ll have to wait and see, but groups like Greenpeace and the WWF in Europe have done a tremendous job and have put pressure on governments to seriously address the bluefin tuna issue,” says Jones.

“We hope they continue to apply pressure because at the end of the day all the concessions we’ve got thus far are due to the NGO’s and we need them in order to maintain this fishery.”

WWF is planning to raise awareness of the issue in several countries, including Japan, where 80 per cent of Mediterranean Bluefin ends up. If the fishery does collapse it is unsure what affect its disappearance would have on the Atlantic ecological system, but it would mean the end of a 3,000 year-old fishing tradition.