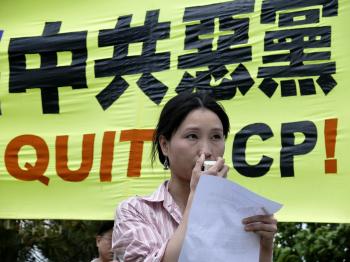 Speaking in support of 55 million Chinese renouncing the CCP, at a rally in Toronto, May 30, 2009. (Eric Sun/The Epoch Times)
China

By Chen Lu
Print
Armed with only a calling card, a phone, and a sincere heart, Falun Gong practitioners are dismantling the Red Wall one stone at a time.

Working in their spare minutes with their own resources, overseas volunteers make thousands of calls to Chinese citizens urging them to withdraw from the Chinese Communist Party (CCP).

They do it, they say, to help disassociate people from the Party that they believe will soon fall—taking those tied to it down with them.

Five years ago, The Epoch Times published the editorial series, “Nine Commentaries on the Communist Party,” triggering a movement among Chinese to withdraw from the Party and its affiliated organizations. Over 60 million people have now taken that step.

The “Nine Commentaries” gives a comprehensive insight into the history and nature of the CCP by drawing upon official CCP records, third party accounts, and extensive personal testimony. In 2005 the book was awarded the National Journalism Award by the Asian American Journalists Association.

Inside China, Falun Gong practitioners and supporters risk their lives daily to distribute the “Nine Commentaries” and help people quit the CCP. Overseas, hundreds of volunteers are also helping to propel the tide of withdrawals.

The CCP is a Leninist-type organization with a strict membership structure. Members have to swear a oath to the communist flag to be admitted, making a vow to struggle for communism for the rest of their lives.

Ms. Yu from Vancouver has helped many veteran CCP members, police, and other officials resign from the Party. She said it is usually more difficult when talking to someone who has special status in the Party.

“Once an official answered my call,” Yu said. “He said he had already received three calls advising him to quit the Party, and that he admires the overseas Chinese. He also recognized the CCP’s corruption, but hesitated to actually withdraw. I talked to him about the series of political movements since the CCP gained power, especially the Cultural Revolution, during which time every party official along with their family members became a victim and a target for attack.”

Ms. Yu said the official acknowledged what she said and gave her his last name to withdraw from the Party. “So I made up a nickname to go with it—to protect his identity and safety. He thanked me, and I wished him a safe and happy future.”

She said that phone call took more than 70 minutes. “Several times, I considered giving up, thinking to myself the time might be better spent making more calls. But I didn’t give up, and in the end, he decided to withdraw.”

Connecting With Groups of Workers

Ms. Yu made many phone calls to dormitories housing migrant workers, most of whom are members of the CCP or the Communist Youth League (CYL). She often found that if one person agreed to quit, the others in the group would do the same.

“Once I talked with five people living in the same room. They took turns chatting with me, but no one responded to the main issue. Finally, I raised my voice and said, ‘We do not know each other, but I am calling you from another country. Please think about how important this phone call is, and give me a few minutes to talk seriously with you.’”

Ms. Yu said she talked about the CCP's corruption, about the the Wenchuan earthquake, and the massive protest of steelworkers in northern China.

“Finally I asked, 'Should a Party that is doing so many bad things be allowed to continue? All of you raised your fist and swore to devote your life to the CCP. It is as if you pledged your life to something evil. Now that it is close to disintegration, if you do not withdraw and void that pledge, aren’t you also in danger?'”

She said suddenly one person seemed to understand and agreed to quit the CCP. Then the phone was passed around, and soon all five had quit.

“One even asked me to submit a withdrawal for his wife who 'hates the CCP.' That was only one phone call, but the result was six people withdrawing from the Party.”

Mrs. Ma, another volunteer, told us how one day she came across an old phone book with names of former classmates. “I hadn’t contacted them for over 10 years, so I thought of calling them to ask them to quit the CCP. I knew their numbers might have changed, but I tried anyway.”

She connected to an old friend when she dialed one of the numbers. “We were both excited and began to chat. He said after he retired, he just reads books everyday and occasionally walks in the park.”

After hearing about it and the tide of party withdrawals, he said he would find the book to read. He also withdrew from the Party, saying to Mrs. Ma, “I trust you, so you can just help me do it.”

The Bitter and the Sweet

Not all calls go so smoothly. Mrs. Ly, a practitioner in Vancouver, told of people swearing at her or speaking in dialects she could not understand, especially when she first began. Her husband was impatient, accusing her of wasting time and money. “I really felt wronged at first,” she said. "But then I changed my thinking and strengthened my resolve to help people."

“Sometimes it even felt like having a conversation with a friend,” Ms. Ly said. “The person would say, ‘I have been thinking of quitting the CCP, but I don’t know how to do it. If you can help me, I’d be so thankful.’

“There were also people who, after just listening to a few sentences from me, would begin to say that the CCP would surely be eliminated since it is so bad. They would tell me about persecution their family members had suffered. One man told me, ‘I feel so much better after talking to you. I know you are a Falun Gong practitioner, You are all good people.’”