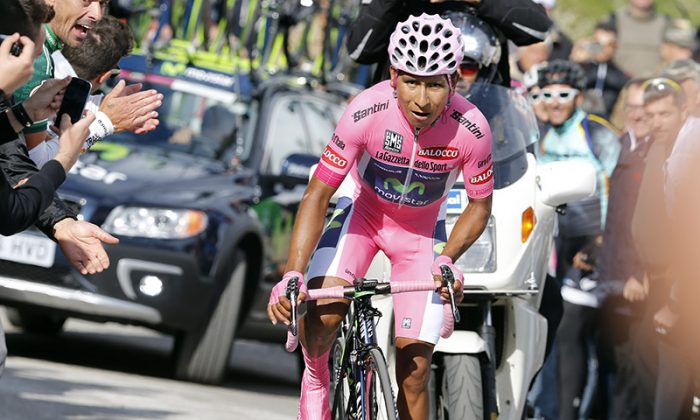 Quintana Wins Stage 19, All But Locks Up 97th Giro d’Italia

Movistar’s Nairo Quintana won his second stage and all but sealed up his first Grand Tour win in the Giro d’Italia Stage 19 mountain time trial.

The 24-year-old Colombian climbing ace finished the 27-km course in 1:05:37, 17 seconds better than his closest competitor, extinding his lead in the General Classification to 3:07 over Omega Pharma-QuickStep leader (and fellow Colombian) Rigoberto Uran.

Uran finished second on the stage behind Astana’s Fabio Aru, whose time of 1:05:54—over a minute quicker than anyone before him—had the Italian fans screaming, but the crown was not to see another stage win by an Italian on this day. Quintana was quickest at by eight seconds at the second time check and went faster the closer he got to the finish.

Aru’s ride was good enough to get him into third in GC, displacing Europcar’s Pierre Rolland, who lost 1:55 on the day.

Rafal Majka of Tinkoff-Saxo also lost out dropping from fifth to sixth in GC.

Cadel Evans of BMC put in a powerful ride, finishing 11th and advancing from ninth to seventh, displacing Garmin-Sharp’s Ryder Hesjedal who lost his chain on the way up and lost time getting a new bike.

The top ten on the day included three Colombians and four Italians, and several young riders: Quintana and Rafal Majka at 24, Tim Wellens at 23, Fabio Aru at 22, and Sebastian Henao at only 20. Not only has this Giro seen the return to the top levels of cycling of the climbing Colombians, it has seen the first major successes of the riders which will be driving the sport for the next ten years.

The final mountain stage, with two categorized climbs before the finish atop the Zoncolan, probably won’t include much fighting for the overall lead. So long as Nairo Quintana can in sight of Rigoberto Uran halfway up the final climb he is almost guaranteed the GC win, and Quintana has a full complement of teammates ready to help.

Fabio Aru will attack ferociously to try to take second place—he is only 41 seconds behind Uran, who looked tired in Stage 19. The riders in fourth, fifth, and sixth—Rolland, Pozzovivo, and Majka—are close enough together to contest those positions. Everyone else will be looking either to limp through the day and rest, or to try to start or follow some crazy breakaway to take the stage victory.

And after all, Quintana might decide to ride for a final stage win because, why not? If he feels good, winning on the Zoncolan will make the whole Giro that much sweeter.