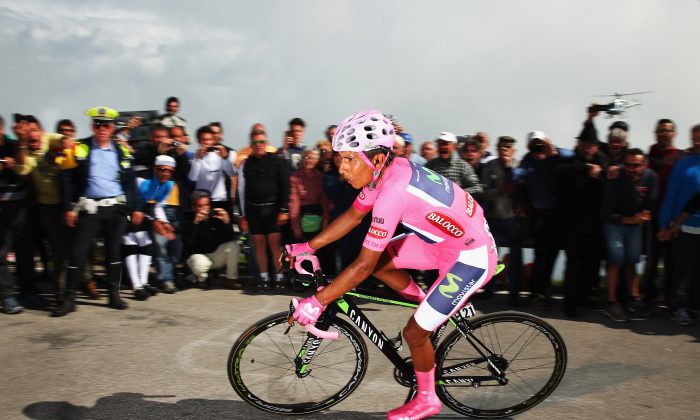 Nairo Quintana of Movistar on his way to winning the nineteenth stage of the 2014 Giro d'Italia, a 27km Individual Time Trial. (Bryn Lennon—Velo/Getty Images)
Cycling

Giro d’Italia winner Nairo Quintana will start his first Grand Tour as a team lead—but Movistar’s climbing specialist will have to share that role with the UCI points leader Alejandro Valverde.

24-year-old Nairo Quintana won his first pro event, the Tour de l’Avenir, in 2010, and the Mountains classification of the Volta a Catalunya in 2011. In 2012 the Colombian climbing expert joined Movistar and swiftly captured first overall in both the Vuelta a Murcia and Route du Sud

In 2013 Quintana won the Tour of the Basque Country and the Vuelta a Burgos and finished second in the Tour de France behind Sky’s Chris Froome (whom he will face in this year’s Vuelta.)

2014 has been a career year for the young Colombian; he has already won the General and the Mountains classifications at both the Tour de San Luis and the Vuelta a Burgos, as well as winning his first Grand Tour, the Giro d’Italia.

Alejandro Valverde has a much longer and more complicated curriculum vitae. The 34-year-old Spaniard started winning as a pro in 2003; he finished third in the Vuelta in 2004, and finished second in 2006, when he also won the UCI ProTour championship.

Valverde kept winning through the next two years, repeating as ProTour champion in 2008 and winning GC in the Critérium du Dauphiné Libéré, and won the Liège–Bastogne–Liège One-Day Classic and the Spanish road race championship.

2009 was an even bigger year: first overall in the Volta a Catalunya, Vuelta a Burgos, and Critérium du Dauphiné Libéré, plus his first Grand Tour win, the Vuelta a España.

The next year was as bad as 2009 had been good: the soaring Spaniard was brought down by his use of performance-enhancing drugs, which earned him a two-year ban from the sport.

When Valverde returned to cycling in 2012, he showed that he had not been sitting idle during his down time. The then 32-year-old finished first overall in the Vuelta a Andalucía and won both the points and the combined jerseys, then took second in the Tour Down Under. he crowned his comeback year by coming home second in the 2012 Vuelta and third in the World Cycling Championship Road Race.

2013 saw the Spanish rider winning points and overall at the Vuelta a Andalucía, and handful of Classics podiums. That year he finished third in the Vuelta, and in the World Road Race Championships.

2014 has been Valverde’s best year since returning to the sport. he has won the Spansih national Time trial Championship, the Vuelta a Andalucía, Vuelta a Murcia, Roma Maxima, GP Miguel Indurain, La Flèche Wallonne, and Clásica de San Sebastián, with podiums at Liège–Bastogne–Liège and Strade Bianche. In July he finished fourth at the Tour de France.

That Tour de France performance is the crux of Movistar’s indecision when naming a team leader. obviously both riders are on great form, but Valverde has had less than a month to recover from his Tour de France efforts, while Quintana has not raced in over two months.

Valverde might be deeply tired—something which might not show up until the crucial final mountain stages. However, Quintana could be stale—no amount of training can equal the rigors of racing. The young Colombian could ride himself into form, but he might be too far behind the race leaders by the time he hits his peak.

Valverde is a veteran; he is in his cycling prime, he has his full strength, and he knows how to use it—when to conserve and when to unleash his best efforts. He might not be able to ride two Grands Tours back to back—but there are riders (Adam Hanson comes to mind) who have ridden all three in a year. Valverde might have it in him.

Quintana has yet to reach his full strength; he will need a few more years of competitive riding to build the deep reserves of power needed to ride a pair of 21-stage Grands Tours in a single year. possibly though, his extended rest might have allowed him to make a full recovery; for Quintana, the Vuelta might seem like the first race of the season.

Of course, both riders might be perfectly prepared, in which case it will be a matter of how each copes with the course.

The route for the 2014 Vuelta a España would seem to favor a time-trial specialist—Alejandro Valverde—over a pure climber like Nairo Quintana. There are three mountain stages in the first two weeks, but they are not sequential, and there is a time trial right after the first rest day.

There are three consecutive mountain stages before the second rest day, then two more, separated by a day, in the final week. The last stage is another time trial—a flat route, perfectly suited to let Valverde make up time he might have lost in the mountains.

Quintana is not unable to ride a time trial, though. he beat the field in Stage 19 on the way to his Giro win in May.

Choosing a leader will be the will be tough: if Movistar chooses to protect the wrong rider, the other might be too tired from riding support to take over as leader if the first choice falters. But that is a minor worry compared to the biggest challendges: Sky’s Chris Froome and Tinkoff-Saxo’s Alberto Contador.

Froome and Contador are arguably the best stage-race riders on the planet. Both centered their 2014 seasons around the Tour de France, and both crashed out before the race was half over, Froome with a broken wrist and hand and Contador with a broken leg.

It is anyone’s guess what form either of these riders will bring to the Vuelta. Froome had a less severe injury and almost a week longer to recover; also, he had the use of his legs while recuperating, so he could ride a trainer. Contador had to spend a month sitting down; it seems unlikely he could be on top form so quickly after breaking both a fibula and tibia. In fact, when the Spanish champion announced he would ride the Vuelta, he also told the press he would only be fighting for a stage win at best.

“Perhaps in the last week, I can fight for a stage win,” Contador said in a press release, according to Velonews. “It will be a very different Vuelta than I had considered earlier in the season, but I think it can be very good for me looking ahead to remainder of this season and the start of next year.”

Chris Froome seemed more positive about his chances for an overall win, telling AP, “I’m really pleased with how my recovery has gone since the Tour, I’ve been training hard and the support team are pleased with my progress.”

Movistar general manager Eusebio Unzué said on the team website, “Froome has been the dominator of Grand Tours in recent years, and respecting that, he should be the main favorite. About Alberto [Contador], after the fitness level he’s shown all year long, if he has decided to race, it’s because he feels close or right in his top condition.

Nairo has proven to be doing well, and the only concern you could keep is how he will react to a second Grand Tour in the same year, because there are no precedents for him.

“It will be the race itself which decides who our leader will be.”

The 2014 Vuelta a España begins on Saturday with a team time trial in Jerez de la Frontera.