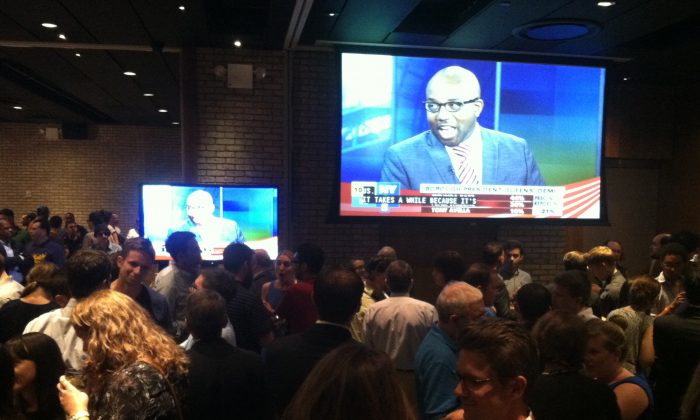 NEW YORK—Primary election night at City Council Speaker Christine Quinn’s election party location got off to a somber note on Tuesday night with a live broadcast speech by President Barack Obama on Syria.

During the approximately 20-minute speech, Obama explained his reasoning for deciding to move forward with targeted military strikes in Syria. The audience, mostly Quinn’s campaign staff along with members of the press, remained riveted to the several large-screen TV’s in the room.

After it was over, the sound on the televisions were muted, music was turned on, and Quinn supporters began to stream in for the party.

At about 9:30 p.m., early exit polling showed Christine Quinn in third place with 18 percent of the vote. Quinn was behind Bill de Blasio in first place with over 40 percent, and Thompson was in second place.

The packed party of Quinn supporters, campaign staff, and reporters fell dead silent when the news came on, but there was no audible reaction.