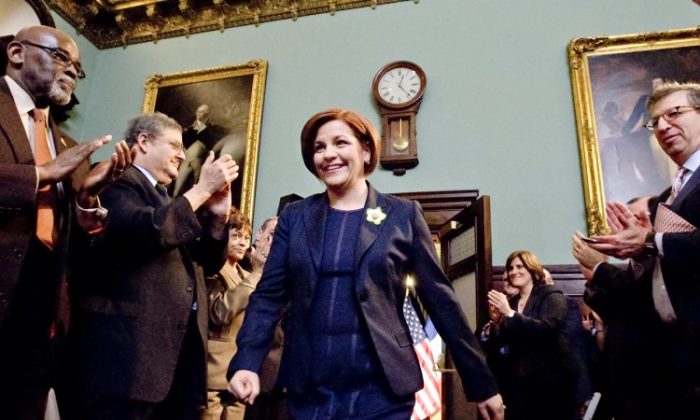 NEW YORK—Outgoing City Council Speaker Christine Quinn outlined a range of new proposals in her last State of the City speech before her expected run for the mayor’s office.

The biggest project in this year’s speech is to create 40,000 new apartments that are affordable for the middle class over the next decade.

Most of the ideas Quinn takes credit for—including the new apartment proposal—are from Bloomberg and his administration, said Nicole Gelinas, senior fellow at Manhattan Institute, a free market think tank.

“She’s basically saying, if you like Bloomberg’s economic development strategy, you should elect me,” said Gelinas. “If anyone should get the credit for that, it should be Bloomberg.”

Quinn’s housing proposal is layered on top of Bloomberg’s larger plan to create or preserve 165,000 lower-income units, according to Quinn’s speech.

Councilmembers after the speech on Feb. 11 said the lack of affordable housing for the middle class—those making $66,400 to $199,200, according to the council’s Finance Division—is a crucial issue that needs to be addressed.

“I always get the complaint from my constituents that those folks who are working class, they seem like they have benefits; the folks who are wealthy obviously don’t need any benefits; it’s the folks in the middle who are getting squeezed,” said Councilman David Greenfield, representing south Brooklyn. Councilwoman Margaret Chin, of Manhattan’s Chinatown, said that her district is losing affordable housing while new luxury buildings are built.

Quinn said that to create the new units, the city would have to further streamline operations (cut costs), use the capital budget more efficiently, and borrow more money. With interest and mortgage rates at an all-time low, according to Quinn, “This is the right move at the right time.”

But Gelinas said that the plan would do nothing but increase the price of housing for everybody else.

“This is classic special interest governing—she has her council people, they all want to keep groups of special interests happy, and she does a very good job of that,” said Gelinas. “But it’s not much of an accomplishment. It doesn’t make the city any better.”

Quinn helped extend term limits so that Bloomberg could serve a third term as mayor. At the same time, the extension enabled many council members to retain their jobs for a third term.

“It’s a complex deal, right, because you make the people you work with extremely happy, but the voters aren’t necessarily happy with that,” Greer added. “We said this in 2009: This decision will come back to haunt her constantly. It might not sink her battleship, but it is following her in a way that many people just don’t feel comfortable with.”

That decision will likely overshadow her earlier accomplishments, said Bruce Berg, also an assistant professor of political science at Fordham University. He said before she became speaker of the City Council in 2006, she helped bring important issues to light, such as domestic violence. A recent move independent of the mayor was supporting living wage legislation, though that ultimately got watered down to the point where it’s only going to apply to several thousand people at most, said Berg.

As speaker, Quinn has been criticized for distributing discretionary funding unequally to councilmembers for their districts.

The top recipient, Councilman Dominic Recchia Jr., received $68 million from 2009 through 2012, while Councilman Daniel Halloran tied with former Councilman Tony Avella at the bottom, receiving under $10 million in the same period.

According to government watchdog Citizens Union, “the distribution process to members remains politicized and does not address the relative socioeconomic status of districts by any understood objective measure.”

Citizens Union, however, points out that Quinn has improved government transparency, including publishing the full figures in the first place.

And, said Berg, who has written a book on New York City politics, the amount of funds the speaker can dole out and the overall power he or she wields has been far less under Quinn and her predecessor Gifford Miller than under Peter Vallone Sr., who used to be feared by many councilmembers.

With a series of Independents and Republicans as mayor—other than David Dinkins, who Berg says disappointed a lot of people—there’s a range of social groups that hope a Democrat mayoralty “will be more generous to the have-nots in the city,” said Berg.

“If it comes to pass,” he added, “it will be fascinating to watch.”