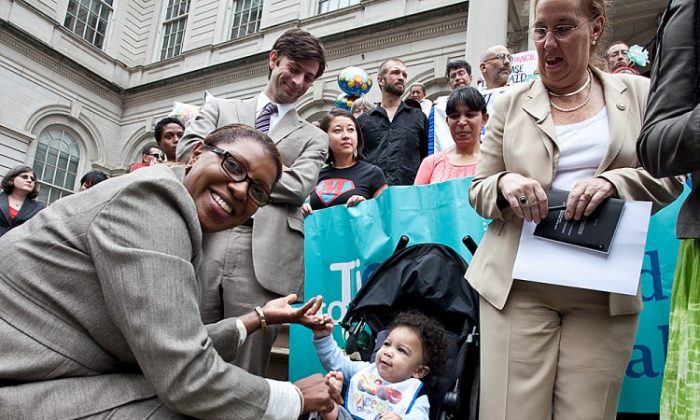 NEW YORK—Pressure on New York City Council Speaker Christine Quinn continues to grow as her opposition to a paid sick leave bill is frustrating her fellow council members, advocacy groups, and families across the city.

According to city Councilwoman Gale Brewer, 37 members of the City Council support the bill, which would require businesses with five or more employees to give their employees five paid sick days a year. The bill would affect the 1.6 million workers who currently do not have any paid days off.

According to supporters of the bill, Speaker Quinn is the only thing getting in the way of the Council putting it to a vote.

“I have never seen a bill that has been more debated, more documented, more scrutinized, with more supporters,” Public Advocate Bill de Blasio said from the steps of City Hall Thursday. “Everyone has weighed in. How has this not been brought to the floor?”

Approximately 100 parents, children, and city leaders rallied at City Hall before delivering a petition with 50,000 signatures in hopes of swaying the speaker’s mind.

Quinn’s office issued a statement, “As the speaker has stated before, given the current economic reality, now is not the right time for this policy.”

Sarah Jane Glynn, policy analyst at the progressive think tank, Center for American Progress, says that is an argument they have heard before, but don’t buy into. “If anything, times of economic hardship are when these types of laws are more important than ever because now is a time when people can’t afford to lose their jobs just because they got sick or because their child got sick,” Glynn said by phone Thursday.

Nancy Ploeger, of the Manhattan Chamber of Commerce said via email, “The 5 Boro Chamber of Commerce Coalition opposes any unfunded mandate that will put more financial burdens on the backs of small businesses in what is already the highest cost city in America. We continue to oppose the … proposed legislation and applaud the speaker for continuing to recognize the negative impact this would have.”

Glynn countered, saying the cost of replacing a worker is much higher than paying for sick time because another employee, often getting overtime, will need to fill the extra shift and when a new employee is hired, he or she must be trained.

“In the end it is actually cheaper to pay someone when they have to be out for a day than to have to hire a new worker to take their shift,” Glynn said.

Mandatory paid sick days are not common, with only one state—Connecticut—offering a statewide law. San Francisco has had a citywide law on the books since 2007, with Washington, D.C., following suit in 2008 and Seattle in 2011.

A 2011 report by Institute for Women’s Policy Research analyzed the affects of the law in San Francisco, finding that one-third of the workers did not use the paid sick days, contradicting speculation about rising wage costs.