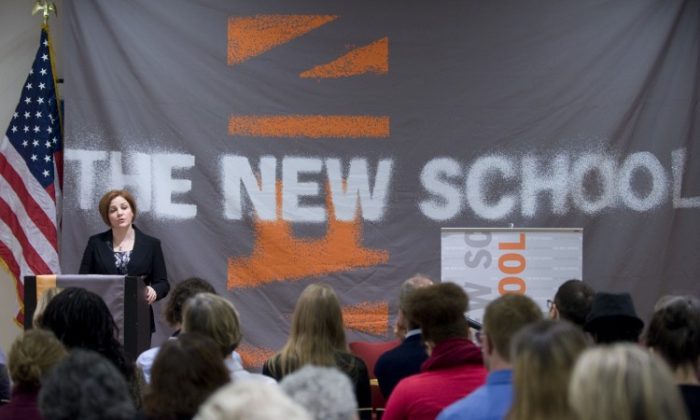 NEW YORK—New York City Council Speaker Christine Quinn has not formally announced her candidacy for mayor, but she is already speaking like one.

Quinn showcased her vision for the future of education policy in New York City Tuesday, delivering a 45-minute speech to a group of teachers, administrators, and education advocates at the New School, who applauded pieces of her proposals, and whispered disapproval at others.

Quinn is looking to the future at the helm of New York City. The practice of giving a policy speech for a future office is quite common in politics, both inside and outside of New York.

“Everyone knows what she is doing when she shows up and gives that kind of address,” said Bruce Berg, professor of political science at Fordham University. “What she said today has little or nothing to do with her remaining months as Speaker of the City Council and had much more to do with her setting up a set of policies she can run on when she runs for mayor.”

Other Democratic candidates are likely to include former Comptroller Bill Thomson, current Public Advocate Bill de Blasio, and embattled current city Comptroller John Liu. “There will be a need to distance oneself from the other candidates and this is certainly one way to do it,” Berg said.

Quinn introduced a four-point plan, which included replacing textbooks with electronic tablets, an effort she says will be offset by the $100 million cost the district already spends on textbooks per year.

Speaker Quinn was also critical of the current system of using standardized testing as a method to grade students, as well as teachers, on their performance. She would like to see the addition of portfolio assessments, where students are graded on their work, not one test.

To help underperforming teachers, Quinn suggested a Mentoring Teacher program that will allow the best teachers to help struggling ones and will fund the program through the $450 million professional development fund.

While Quinn’s ideas are forward thinking, as city council speaker, she would have little to no power to implement those changes.

“Most of the city’s education policies are mandated by the state and at best the state empowers the chancellor of the schools system to implement changes,” said Berg, “The City Council legally is preempted from making those kinds of changes.”

There is no question Quinn is looking to the future, and it may not just be for one term, “When we look ahead at the next ten years, we have cause for great optimism,” Quinn said. “The foundation is there. We just need the vision and conviction to build on it.”