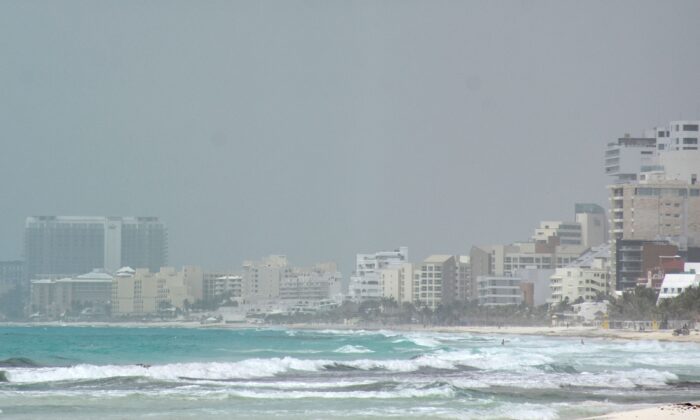 View of a cloud of Saharan dust over a beach in Cancun, Quintana Roo state, Mexico, on June 25, 2020. (Elizabeth Ruiz/AFP via Getty Images)
US

PUNTA GORDA, Fla.—The new hurricane season in Florida has been quiet so far in 2022, with the tropics seemingly sleeping at the moment.

Forecasters are predicting no tropical development for the next 10 days and that may be attributed to a phenomenon known as Saharan Dust.

It is a large plume of Saharan dust that travels across the Atlantic Ocean with Florida and the Gulf of Mexico as its target.

Experts say that Saharan dust is unusually dense and limits the chance for tropical storm development, Dr William Landing an emeritus professor in the Department of Earth, Ocean and Atmospheric Science at Florida State University told The Epoch Times.

“Saharan dust does affect hurricane development,” Landing said. “It’s the dust that gets lifted up and that gets transported offshore—the Saharan Air layer.”

Landing described the phenomenon as dust that “gets lifted up by strong winds” over regions in North Africa where the dust originates.

When it is lifted up it blows out over the Atlantic Ocean towards the Caribbean and towards Florida and the Gulf of Mexico every three to five days, he said.

Tropical development has been quelled because the Saharan dust plumes continue to move off the coast of Africa and limit formation chances for tropical waves.

The FSU professor said that hurricanes need moisture to form and strengthen and the winds that are responsible for moving the dust across the Atlantic limit the organization of tropical systems.

The wind shear tends to break up hurricanes, so the wind shear plays a big role in tropical development, he explained.

“There’s just not enough evaporation to fuel the hurricane so those biggest factors are the dryness and the wind shear.”

Landing said that the Saharan dust plumes typically happen from May through July before subsiding. Once the dust recedes, an uptick in tropical activity begins, he said.

The statistical peak of hurricane season begins on or about Sept. 10.

This year, however, we’ve still been seeing plumes move off Africa through the first weeks of August, he continued.

Landing said this much Saharan dust in the Atlantic right now is “a bit unusual.”

Sixty-one percent of all storms form in August and September meaning that the majority of the storms have yet to form according to historical averages, he said.

However, the predictions for the 2022 hurricane season have not changed.

According to the National Oceanic Atmospheric Association (NOAA), there will be 14 to 21 named storms this year.

CSU predicts 20 named storms, including 10 hurricanes of which five would be major—a major hurricane is defined as a Category 3 or stronger with winds of at least 111 mph.

Three of the 20 have already formed which leaves 17 more tropical systems left to develop.

“Current La Nina conditions are likely to persist for the rest of the Atlantic hurricane season.

“We continue to anticipate an above-normal probability for major hurricanes making landfall along the continental United States coastline and in the Caribbean,” the CSU website said.

Also, vertical wind shears over the Caribbean and tropical portions of the Atlantic are weaker than normal.

“We anticipate an above-normal probability for major hurricanes making landfall along the continental United States coastline and in the Caribbean,” CSU professors predicted on Aug. 4.

Since 2013 NASA has been tracking Saharan dust via satellite, where it is estimated that 182 million tons of dust leave Africa every year where the “dust-laden air” rises to the highest range of the atmosphere and is carried by the trade winds (blowing east to west) 3,000 miles across the Atlantic Ocean and eventually to the southeastern portion of the United States.

When dust plumes are present skies will have a “hazy or milky appearance” depending on how thick the plume is, Landing explained.

“They make for beautiful sunrises and sunsets,” he said. “The color of sunsets appears to be redder when the dust plume is present.”

According to NASA’s website, the Saharan dust plume has benefits.

“We think a dust storm has three main components that can suppress a hurricane,” Jason Dunion, a researcher who participated in the NASA African Monsoon Multidisciplinary Analyses (NAMMA) campaign said on NASA’s website.

“One, it’s got super-dry air. Hurricanes don’t like dry air in the middle parts of the atmosphere, and that’s exactly what the Saharan Air Layer has.

“A Saharan dust storm also has a very strong surge of air embedded within it, called the mid-level easterly jet, that can rip a storm apart that’s trying to develop. We call that vertical wind shear.

“And then the third piece is all this dust.”

“All this dust” that Dunion is referring to, Landing explained, is the dust that contains metals, which is a necessity for plants.

“Minerals in the dust such as iron and phosphorus are critical for plants,” he said. “The dust acts like fertilizer; it’s what makes things in your garden grow—they need trace metals like iron, manganese and cobalt.”

Landing explained that the dust is pulled down from the atmosphere in order to reach plant life by convective thunderstorms.

“Convective thunderstorms will reach up and grab the dust out of the air and bring it down to the surface,” he explained.

It has been 43 days since a storm has been named and 23 years since a hurricane season has been this quiet, Landing said.

“It’s not clear whether there is a connection between the amount of Saharan dust and an inactive or slow start to the season,” Landing said. “There isn’t enough data to draw that conclusion, but time will tell.”

However, the professor warned that people should not let their “guards down” and “always be prepared” regardless of the level of activity.