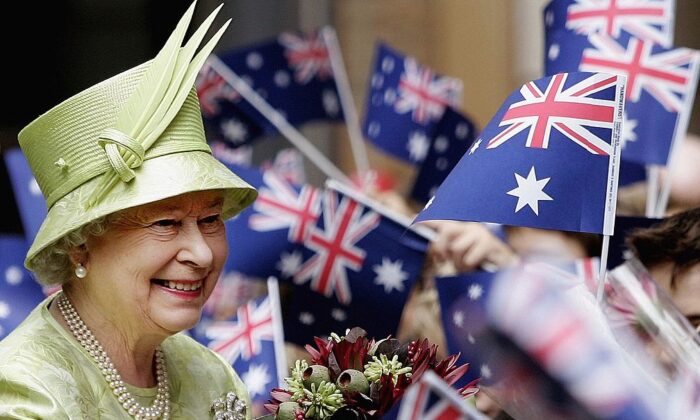 Queen Elizabeth ll smiles amongst Australian flags being waved by the crowd after the Commonwealth Day Service in Sydney, Australia, on March 13, 2006. (Rob Griffith-Pool/Getty Images)
Australia

Prime Minister Anthony Albanese, opposition leader Peter Dutton as well as federal MPs, premiers, and other guests attended the service commencing with a minute of silence.

Albanese praised the Queen as a “rare and reassuring constant in a world of change” for many people.

“In an age of performative celebrity, the Queen embodied quiet dignity,” he said.

“In an era of fads and fashionable causes, the Queen did not seek to chase the times—instead she held to qualities and virtues that are timeless: love of family, loyalty to country, service to community, kindness to those in need, respect for everyone she met.”

“She stood for things we loved and admired most about our own parents and grandparents. Their decency, their wisdom, their patience, their work ethic, their instinct for service above self.”

Meanwhile, Dutton described the Queen’s rule as “extraordinary, the like of which we will never see again.”

“A reign spanning 70 years with tens of thousands of public engagements. It’s a legacy the little ‘Lilibet’ could not have imagined,” the opposition leader said.

“She left the monarchy in a stronger position than the precarious one she inherited.”

Dutton recalled the Queen’s speech in 1957 in which she said “trouble is caused by unthinking people who carelessly throw away ageless ideals as if they were old and outworn machinery. They would have religion throw aside, morality in personal and public life made meaningless, honesty counted as foolishness and self-interest set up in place of self-restraint.”

He noted that the Queen’s words were “profound.”

“Perhaps Her Majesty’s greatest triumph will be a renaissance of the virtues and values she embodied in life.”

“Virtues and values which we still admire, but which are often wanting in a more retributive, revisionist and self-entitled world today.”

“Those of duty, of service, of sacrifice, of fortitude, of stoicism, of grace, of humility, of generosity, of forgiveness, and empathy.”