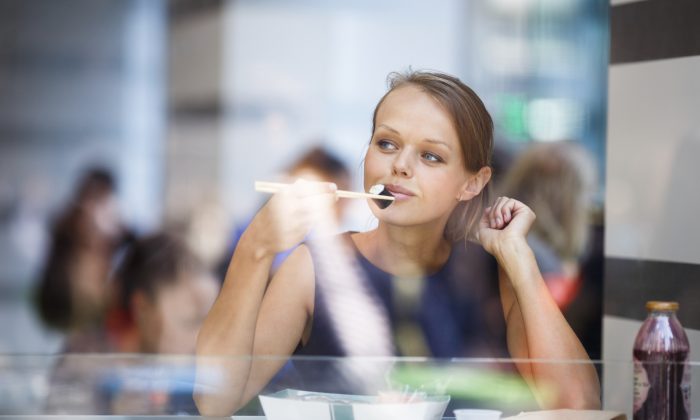 A study says slow down to enjoy. (ViktorCap/iStock)
Science

New research suggests breathing slowly and evenly can help you get the most out of your meal.

Tasting food relies on food volatiles moving from the back of the mouth to the nasal cavity, but researchers have wondered why airflow doesn’t carry them in the other direction, into the lungs.

Engineers, using a 3-D-printed model of the human airway from nostril to trachea, have determined that the shape of the airway preferentially transfers volatiles to the nasal cavity and allows humans to enjoy the smell of good food.

“During quiet breathing, there is no valve that can control the direction of volatile transport,” says Rui Ni, assistant professor of mechanical engineering at Penn State. “However, something must be controlling the movement of these particles and keeping them out of the lungs.”

In the past, physiologists looked at the nasal passages, but not at the pathway from the back of the mouth to the nose. In this case, the researchers used data from CT scans and the help of two radiologists to build a schematic of the human airway from the nostrils to the trachea, including the fine structure. They then used the schematic to make a 3-D model using a 3-D printer.

Ni and colleagues then tested airflow into and out of the airway. They report the results in the Proceedings of the National Academy of Sciences.

However, when air is exhaled, it sweeps into the area with abundant food volatiles moving them into the nasal cavity where they are sensed by olfactory cells.

What’s That Smell? A Controversial Theory of Olfaction Deemed Implausible
What a Handshake Smells Like

Movement of the particles is also effected by the speed of breathing.

“Smooth, relatively slow breathing maximizes delivery of the particles to the nose,” says Ni. “Food smells and tastes better if you take your time.”

This slow, steady breathing optimizes the unsymmetrical transport effect and allows more air to sweep particles out and up. Ni suggests that for a really good meal, taking time to slow down and breathe smoothly will deliver more smell and flavor.

Additional researchers contributed from Penn State and Yale University. The National Institutes of Health and the National Science Foundation supported this work.