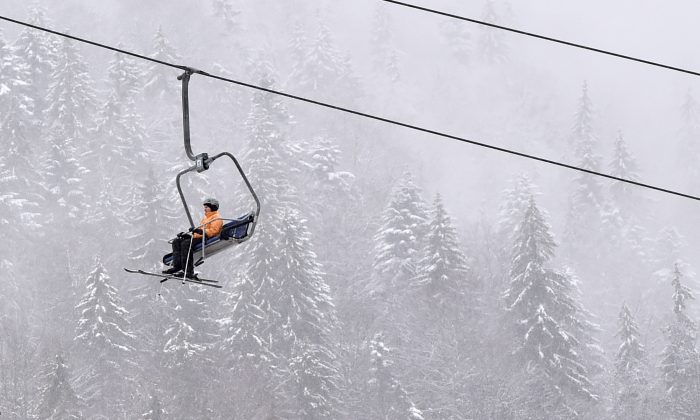 In this file image, a skier rides a ski lift in the popular Ukrainian ski resort of Bukovel, in the Carpathian Mountains, on Dec. 15, 2017. (Sergei Supinsky/AFP/Getty Images)
Canada

A group of teenagers rescued a small boy who was dangling by one arm from a chairlift with quick-thinking, teamwork, and some plastic fencing.

The dramatic rescue was caught on video by an eyewitness who can be heard exclaiming “Wow, they’re heroes!” as the group of five friends—aged just 13 and 14—catch the falling boy in a makeshift net.

The 8-year-old boy had been left dangling several yards above off the ground after he slipped off a chairlift on Grouse Mountain near Vancouver on the afternoon of Feb. 28, according to Canadian media reports.

In a video of the incident, obtained by Global News, an adult can be seen desperately clinging onto the child—according to his rescuers, clinging onto his gloves.

“They pointed to the lift and I saw the kid dangling and I was like, ‘Holy Smokes,'” one of the rescuers, Ethan Harvey told CTV.

They quickly came up with a plan: while three of them grabbed some plastic safety fencing as a makeshift net, two quickly stripped some padding that was wrapped around a nearby pole.

One of the boys involved in the rescue, Gabriel Neilson said he only realized something was going on when a friend yelled at him to grab the net.

“I looked at the net, then I looked up, and I saw the kid dangling from the chair,” Gabriel said. “At one point, it was just one arm that he was hanging on by.”

The rescuers calmly helped talk the boy through the terrifying moments.

A group of young skiers are being praised for their efforts to help save a boy dangling from a B.C. chairlift.

“I yelled up and told him that he needed to take his skis off,” Gabriel told Global News, explaining that it would have made the landing a lot worse.

The boy can be seen kicking off his skis, as the five boys stand underneath, their net at the ready.

But the boy then needed some persuasion to let go.

The boys said that they had quickly calculated that the plastic fencing was strong enough since it was designed to take the impact of skiers flying into it.

“I think it was just a lot of instinct and kind of hoping that things would turn out well,” Chris Harvey, his dad, told CTV.

“I was already proud of him, but it’s a little extra,” said Harvey. “They see something, they just go and get it done.”

According to Global News, the Grouse Mountain representative said that the boys will receive season passes to the mountain. The company president will meet with them privately to express their gratitude. An investigation is underway in accordance with industry protocol, the representative said.