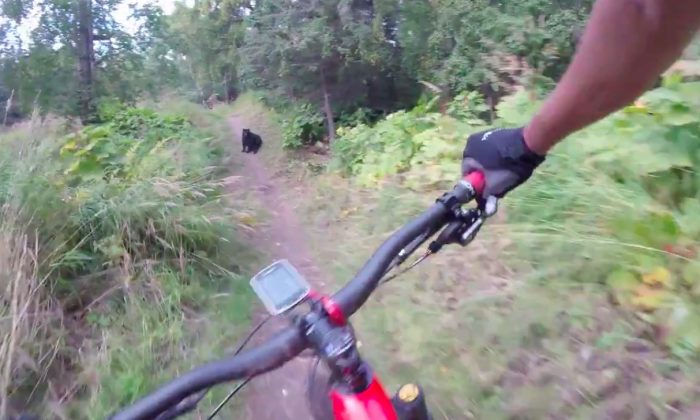 A mountain biker in Anchorage, Alaska, encounters a black bear on his trail, Sept. 12, 2017 in Kincaid Park. (Reddit/pfffhuckit via Storyful)
US

A mountain biker in Anchorage, Alaska, made a hard swerve into the bushes to avoid riding into a black bear that was sitting in the middle of his trail. The incident happened in the city’s popular Kincaid Park.

The rider, Reddit user Pfffhuckit, shared two videos of his close encounter to Reddit and Streamable on Sept. 12.

The posts generated a lot of comments and questions about his experience. As of writing, the Reddit video had garnered over 2,300 comments—most of which he has replied to. Pfffhuckit noted at one point in the thread this was the “first thing” he’d ever posted to Reddit, so he’s responding to almost everything out of excitement.

One user asked if it would have been dangerous to ride right by the bear.

“I would definitely not just bike right by them. I cruise by moose frequently but not bears. It would’ve made for a much cooler video though,” replied Pfffhuckit.

On the topic of the video, another user wanted to know: “What came first to your mind, the fear or the question whether your camera is capturing it all well enough to post it on the internet?”

“I was pretty excited my camera was on. It’s a pretty boring section of the trail.

“Before I left the office for the day one of my co-workers asked why I rode the camera. I said in case anything sweet happens. And here I am,” said Pfffhuckit, who later identifies himself as an accountant.

After the sighting, Pfffhuckit picked himself up from the bushes, then backed up on foot, until feeling safe enough to ride back in the other direction. He captured that on camera too.

One user asked if he thought he really could have outrun the bear had it decided to chase after him. Pfffhuckit didn’t think so.

Someone else asked if perhaps he had overreacted.

“That is very possible. But if it happened again I can’t say my reaction would be any different. A 400-pound bear 30′ feet from you is a bit jarring. Most of the time black bears run off, but just in my area, two people have been killed by black bears this year. In that park alone there is at least a mama and two cubs,” he replied.