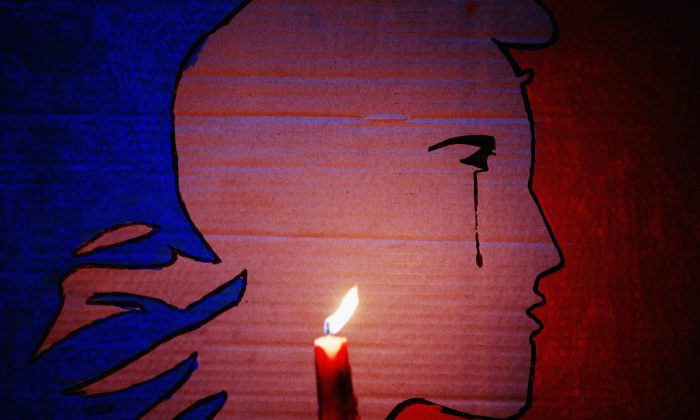 A candle burns during a vigil in Aotea Square to remember victims of the Paris attacks in Auckland, New Zealand, on Nov. 14, 2015. (Hannah Peters/Getty Images)
Europe

SAINT-DENIS, France—The suicide bombers’ remains, clingy flecks of flesh spread in a 10-meter (11-yard) radius around where they exploded, were flushed down the drains of the city they sought to terrorize, washed away by municipal workers with detergent sprays and power hoses.

All that’s left of them now are questions.

Their explosive belts, packed with shrapnel that shattered windows and lodged in walls, were designed to kill and maim.

Yet instead of detonating inside the national stadium packed with 79,000 people watching France beat Germany at soccer, they detonated on less crowded streets outside, during the match, including one in a lonely dead end street 500 meters (546 yards) away.

Clearly, the casualty count of just one bystander killed and several dozen injured in three explosions outside the Stade de France could have been far worse.

Such blasts inside the stadium or outside among crowds before and after the game would have been more murderous and caused even more panic, further overloading Paris hospitals and rescue services scrambling to treat hundreds of casualties with battlefield wounds shot or blown up in the city center.

A combination of solid security at the huge arena, quick thinking in a crisis, modern stadium infrastructure and apparent mistakes in the attackers’ planning appears to have averted a massacre, suggesting that the host of next year’s European soccer championships, which are expected to draw millions of fans from far and wide, is as well-equipped as any nation can be against this vicious new type of threat.

The stadium, much-loved because it was there that the national team won the World Cup in 1998, was the first target hit in Friday night’s murderous spree of six separate gun and suicide bomb attacks. The two city-center teams of attackers killed 129 people and injured more than 300. But the third team, at the stadium, was far less deadly.

As chaos unfurled outside, authorities decided spectators would be safer kept inside and the match went on. That decision was taken by President Francois Hollande, in consultation with French Football Federation officials, the presidential Elysee Palace says.

At least one of the attackers tried to get in, despite not having a ticket, but was turned away, said an official who spoke on condition of anonymity because he wasn’t authorized to publicly discuss the complex and fast-evolving investigation.

One police theory is that the attackers never expected to get inside, knowing they likely wouldn’t get past security pat-downs with their suicide vests, and instead planned to detonate as people filed in before kick-off or filled out after France’s 2-0 victory.

But their timing may have been off, officials say. When they triggered their vests—two during the first half of the match, the third at half-time—the bulk of the crowd was safely inside, enjoying itself.

“We think this operation failed,” a police official said, speaking on condition of anonymity because French law doesn’t allow the release of details from ongoing investigations. “Badly organized.”

A police union official for Saint-Denis, the stadium district on Paris’ northern outskirts, said they still can’t explain why the attack unfolded as it did.

“It’s a total mystery,” said the official, also speaking on condition of anonymity. “Everyone has a theory.”

Bley Bilal Mokono, who arrived late at the game with his 13-year-old son Ryan and a friend, believes he saw one of the attackers— “a man with a beard and a gaunt face”—in the toilets of a restaurant opposite the stadium’s Gate D.

“His face was sweaty, he looked distressed, staring at the mirror in front of him with his hands on the sink,” Mokono told French broadcaster BFM. He saw him again outside, where Mokono had stopped to buy a sandwich. Then came a powerful blast. Mokono was hospitalized with a collarbone injury and damaged hearing.

That first blast, which also killed the bystander, sent shrapnel and flesh whizzing through the restaurant and left a large shattered dent in its frontage of triple-layered toughened glass.

Jeremy, a stadium security guard who would only give his first name for fear of losing his job, said he’d just arrived to help with the aftermath of that blast when a second went off minutes later, 200 meters (yards) away outside Gate H.

“Everyone was stepping on each other,” he said. “It was a mess.”

Stories of Those Who Died in the Paris Attacks

The third attacker, for reasons still unknown, waited another 23 minutes to trigger his vest, killing only himself, away from the stadium, next to a tree and a traffic sign in a small side-road wedged between office buildings.

The shrapnel shot bullet-like holes in windows and shattered glass in the cab of a parked truck.

Back at the stadium, after the match, truck driver Abdelaziz Boucenna was thrown to the floor and trampled, breaking two fingers and bones in the wrist of his left hand, as people panicked as they were filing out. By then, word of the attacks had spread in the crowd. As Boucenna, his son and nephew neared an exit, they heard people yell, ‘he’s coming, he’s coming!” and imagined it must be an attacker.

“I picked up our kid. I wanted to protect him. We were thrown to the floor. The crowd arrived like a wave. My fingers were all twisted,” Boucenna said.

“The kid’s shocked,” he added. “In his imagination, the guy was carrying a bomb that was about to explode. He thought we were going to die.”

Boucenna’s nephew, Mohammed Chelay, said they were directed to the stadium infirmary. But when shown Boucenna’s fingers, “The woman took a look and said, ‘There’s nothing I can do,” Chelay said.

He added that a riot policeman they also asked for help replied: “‘Listen to me, a bomb exploded 25 meters (yards) from me, so I don’t give a (expletive) about your little scratch.”

Another spectator who left the stadium before the end of the match said he ran into chaos outside, with “people hitting the ground and others treading on them. There was a woman sitting on the ground with a head injury and spilling blood.”

He only gave his first name, Said.

Stadium operators and one of the companies in charge of venue security wouldn’t speak to an Associated Press reporter who went Monday to their headquarters. The stadium will host seven matches, including the final, at Euro 2016.

“Dramatic things happened outside the stadium but inside, the police, stewards and spectators were exemplary,” he told French sports daily L’Equipe. “No crush, no panic. There could have been a veritable catastrophe. That wasn’t the case.”