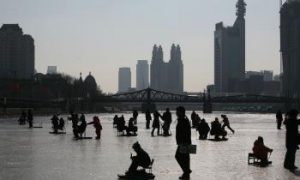 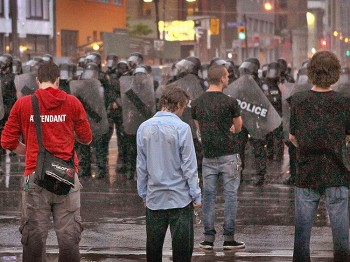 Police officers hold back demonstrators at the G20 summit in Toronto. Critics say that many questions still remain unanswered after the Toronto Police Service released the G20 After Action Review last week. (Scott Olson/Getty Images)
US

Critics say many questions still remain unanswered and that the Toronto Police Service’s (TPS) internal review of the issue does not provide the impartiality of a public inquiry.

In the internal review released last week, TPS Chief Bill Blair admits that the police were unprepared for the events that transpired during the summit.

“The policing challenges of facilitating those very large, lawful, peaceful protests while at the same time arresting those who chose violence and destruction, were immense,” he said in a prelude to the report.

The TPS had only six months to prepare before the G20 summit, Blair said, while host cities of previous summits had two years.

Some 1,100 people were detained over the G20 weekend; a great majority were never charged. According to the TPS report, the police planned for a single court intake officer to process every prisoner and tend to their immediate medical needs. In reality, the facility, which was known to be capable of holding up to 750 people, could not process the 450 individuals that arrived within a few hours on Saturday evening to Sunday morning.

Of the 17 hours Savva spent in the facility, she says she was given little food and water. She says she also witnessed some prisoners with medical conditions being denied access to medication.

“It was definitely very psychologically traumatizing for people,” Savva says.

Some of those arrested are now filing lawsuits against the police. Many are also calling for Chief Blair’s resignation.

Calls for a public inquiry have been rejected by Ontario Premier Dalton McGuinty who says there are enough reviews into the matter, including the Independent Civilian Review launched by the Toronto Police Services Board and a systematic G20 review by the Office of the Independent Police Review Director.

However, Adam Goodman, a Toronto criminal lawyer, says there should be more inquiry into the issue.

“There needs to be an independent respected party, specifically a former judge, who will take the necessary steps and should be given a broad authority to explore the issue,” he says.

Goodman says the police were overwhelmed during the summit and were not adequately prepared.

“From the cases I dealt with, often many of [the police] weren’t getting the proper instruction of what to do,” he says. “There was much confusion.”