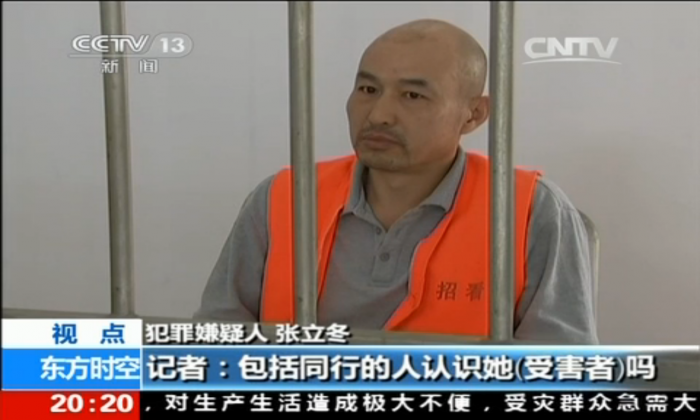 Zhang Lidong, the leader of a gang that killed a young woman, is interviewed by the Chinese Central Television on May 31. Zhang and five others beat a woman to death in a McDonalds in Zhaoyuan City of Shandong Province on May 28. (Screenshot via CCTV)
China

Six people were charged with beating a woman to death in a vicious attack at a McDonalds store in China on May 28, after she refused to give them her telephone number. The police concluded, three days later, that it was an instance of “intentional homicide” due to “cult activities.” The full identities of the criminals have not been made public, and a significant portion of the conversation online about the incident has reflected a deep mistrust of the police, the official media, and the Chinese regime.

Witnesses to the bashing, which took place at around 9:00 p.m. on May 28 at the McDonalds at a mall in Zhaoyuan City of Shandong Province, said that the group of six were asking other customers for their phone numbers.

The gang included a father named Zhang, two of his adult daughters, a teenage son, and two adult women surnamed Zhang and Lü.

The victim, identified as Ms. Wu, declined the request to provide her phone number. “You go away,” she rebuffed one of the young women, witnesses said.

The group, lead by Zhang the male, soon descended upon her, witnesses said. One woman began hitting her with a chair, while Zhang beat her in a frenzy with a newly purchased mop.

Video and witness accounts showing Zhang repeatedly battering her in the head with the metal mop handle, even after it had broken.

“Whoever interferes will die!” the man seemed to yell at one point, according to a video uploaded to Sohu, a video sharing website.

The disturbing footage quickly spread across the Internet. It shows Zhang, a bald man, repeatedly bringing his metal weapon down upon the woman as she lays limp on the ground. The girl’s body is blocked from the camera’s view by a partition. Frightened witnesses, and perhaps the victim, let out screams.

Police arrived at 9:23 p.m., but the attackers continued to beat the girl, who was by that time unconscious in a pool of blood. Police, who were only over a mile away, according to reports, then arrested them.

Police soon announced that all six criminals were members of an “evil religion,” or cult, and that they were asking for phone numbers in order to recruit more members.

Police said that they found books and materials at Zhang’s house about “Almighty God,” also known as “Eastern Lightning,” a banned sect that has been implicated in kidnapping and violence against Christians in China, particularly in the 1990s. Police remarks and official reports also indicated that in light of the bashing, there would be a special campaign launched on all manner of cultic activities in Shandong Province.

China Central Television, the official broadcaster, aired an interview with Zhang in the police station on May 31. He admits to killing the young lady, and says it was due to his faith in “Almighty God.” Zhang said that his daughter told him the victim was a “demon,” because she failed to provide her phone number. Zhang said he’d practiced the religion for seven years.

Chinese Internet users expressed their dissatisfaction with this line of reporting. They argued that it was unusual that the full identities and backgrounds of the attackers have not been disclosed, and complained that the case of a violent murder has turned to focus overly on an obscure sect.

In contrast, netizens said, in the case of a bombing in the Xinjiang Uyghur Autonomous Region on May 22, which was determined to be a “terrorist attack” by ethnic extremists, police released the following day the full names of all five participants. Including DNA tests of four who were killed in the incident.

In this case, although the attackers are said to be unemployed, Zhang was found to own a Porsche Cayenne, worth one to two million yuan ($160,000 to $320,000), according to CCTV. The report says that the group drove the car to McDonalds the day of the attack, and that Zhang also owns another luxury car, an apartment, and a three-storey villa. Many Internet users questioned how he could be so wealthy when he has no job.

The CCTV report included a still of Zhang’s driver’s license for two seconds—long enough for Internet users to extract his full name, Zhang Lidong, and discover his home residence.

Rumors quickly spread that Zhang Lidong is the owner of a gold mine, and paid bribes to local police bureau director Sun Baodong. Zhaoyuan City is known for its gold mines, but no evidence has been adduced about the relationship between Zhang the the police director. The rumor, nevertheless, has gone viral.

Police have not responded to the speculation. Thousands of comments calling for an investigation into Zhang’s ties to the police appear to have been deleted from the Internet, with other netizens complaining about the censorship.

The Internet user @Jia Dahu attempted to summarize the three key elements of discontent held by netizens about the story as it stands so far. As often happens in China, the thoughts appear to represent more an inchoate sense of mistrust and frustration at the Chinese authorities, rather than a cogent alternative theory of the attack.

The first complaint is that the police station is across the street from McDonalds, and yet the criminals were not afraid of the police. Some Internet users saw this as evidence that they therefore must have ties of some sort with the police. Secondly was the fact that Zhang was reported to own a Porsche Cayenne—meaning that they are wealthy, which in China also usually means they must have official ties. And thirdly, it was reported that the attackers did not stop beating the girl even after the police arrived. This meant that “they have power,” Jia wrote. His remark was widely forwarded on the Sina Weibo.

Still others raised concerns about how the sect that Zhang claimed to belong to has been so closely associated with the attack in official reports. Weibo user @Changji Geshi said that the law is for judging and punishing people’s actions when they harm others, not for judging the content of their thoughts.