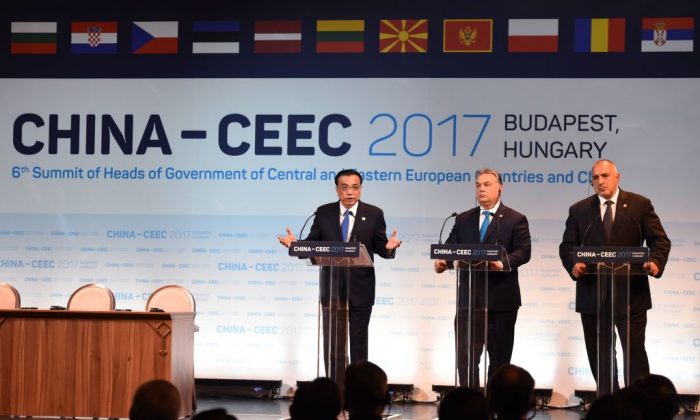 Hungary’s efforts to bolster ties with Beijing in recent years has come under scrutiny from local politicians and media.

During a trip to the Central European country in 2011, former Chinese Premier Wen Jiabao said that Hungary would become a gateway to the European market. Wen’s trip marked the first meeting for the 16+1 platform—and the beginning of China’s efforts to influence Hungary.

Introduced officially in April 2012, the 16+1 platform is an initiative by Beijing to intensify cooperation with 11 European Union member states and five Balkan countries: Albania, Bosnia and Herzegovina, Bulgaria, Croatia, the Czech Republic, Estonia, Hungary, Latvia, Lithuania, Macedonia, Montenegro, Poland, Romania, Serbia, Slovakia, and Slovenia. The platform calls for economic cooperation with China in many fields, including infrastructure, finance, and technology.

The platform eventually became a model for Central and Eastern Europe in Beijing’s next ambitious development project, announced in 2013: the “One Belt, One Road” (OBOR, also known as Belt and Road) initiative. The OBOR seeks to build Beijing-centered trading networks through financing infrastructure projects throughout Europe, Southeast Asia, Africa, and Latin America.

As of April, China has invested a total of $3.27 billion in Hungary, according to data from China’s Ministry of Foreign Affairs.

But at a meeting of the South Asia Democratic Forum recently held in Geneva as part of the 39th Session of the UN Human Rights Council, a group of panelists from Europe openly questioned Beijing’s motivation for its overseas initiatives.

“The European countries have started to understand that debt trap—that has already led Sri Lanka to hand over a port because it could not face the payments related to the loans to the Chinese authorities,” said Paulo Casaca, a former member of the European Parliament (MEP), according to a Sept. 18 article by Indian business daily Business Standard.

The port Casaca is referring to is Hambantota, which Sri Lanka handed over to China in December 2017, after the former wasn’t able to pay back $6 billion in loans and converted the debt to equity.

Meanwhile, István Szent-Iványi, a former MEP from Hungary, said OBOR is a concern because it is Beijing’s “power projection plan” to set up strategic positions of influence in East Asia, Africa, and Europe.

“I would like to raise awareness about it because it really poses a real and serious threat. China is challenging the world order,” Szent-Iványi said. The Hungarian politician identified Djibouti as a country where Beijing is challenging established international rules.

In March, U.S. officials expressed their worries at a congressional hearing about China’s increasing role in Djibouti, where Beijing has newly built its first overseas military base. In September, satellite photos revealed that Beijing was expanding its Djibouti base—a move that was seen by experts as competing with U.S. interests. The United States also has a military base there.

“What China wants is actually to take over. They want to be the global leader. For us in Europe, it is a problem because they want to push us out of the market,” said Siegfried O. Wolf, research director at the South Asia Democratic Forum.

“For example, in Central Asia, if China is providing funds for new infrastructure projects, they have a lot of influence. So, when China sets rail tracks, there won’t be any German or French projects. Only Chinese trains will run on those tracks.”

The railway in question is China’s flagship investment in Central Europe: modernizing the 350 km (about 217 miles) railway connecting the Serbian capital of Belgrade and Hungary’s capital Budapest. Beijing had intended to use this railway—an OBOR project—to transport goods arriving at the Greek port of Piraeus, which is owned by China’s state-owned shipping company COSCO. Cargo would go through Hungary, to be transported to the rest of Europe.

The about 152-kilometer (94-mile) Hungarian section of the 350-kilometer (217-mile) rail line is currently in the planning stage, and is expected to be completed in 2023, according to a Sept. 14 article by Hungarian news site Daily News Hungary. Beijing will finance 85 percent of the rail upgrade—estimated at more than $3 billion in total.

The rationale behind the rail upgrade has been a topic of debate in Hungary, with some questioning whether the project will really help the economy. Hungarian news website Index questioned the hefty price tag in a May 31 opinion article, concluded that upgrading the Hungarian section would be “as meaningless as the developments in Sri Lanka.”

Another opinion article published by Index in April called the project only good for “promoting China’s foreign economic goals,” with little economic gain for Hungary.

Aside from the rail project, Chinese companies also have invested in Hungary’s chemical engineering, finance, telecommunications, new energy, and logistics sectors, according to information from China’s Ministry of Foreign Affairs.

In the realm of telecommunications, Chinese telecom giant Huawei provides more than 70 percent of the Hungarian population with its mobile telecommunication equipment and services, according to the company’s website.

ZTE, another top Chinese telecom firm, has worked with Hungarian mobile-service providers to provide 2G, 3G, and 4G Internet services. According to a Sept. 13 article by China’s state-run Xinhua, the company is seeking to position itself as the 5G network provider for Hungary. 5G is the next-generation of wireless mobile communication technology.

Many countries, including the United States, have raised security concerns about the potential for China to conduct espionage via Huawei and ZTE equipment, as both companies have close ties to Beijing.

China’s monetary influence has pressured Hungary into complying with Beijing’s political agenda. At a hearing at the U.S.–China Economic and Security Review Commission in April, Erik Brattberg, a researcher at the Carnegie Endowment for International Peace, pointed out that Chinese investment has resulted in a “tangible influence on [Hungarian] policy decisions” at the EU level.

For instance, in July 2016, an EU statement on a ruling by an international tribunal in The Hague on China’s sovereignty claims in the South China Sea didn’t directly refer to Beijing, due to opposition from Hungary and Greece. In recent years, Beijing has escalated militarization of disputed territories in the South China Sea, a move that has caused an uproar among nearby countries that also have territorial claims in the region.

Then in March 2017, Hungary reportedly pressured the EU bloc to not add its name to a joint letter by international embassies to denounce the reported torture of detained lawyers in China.